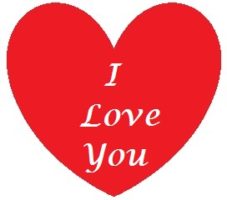 A few years ago we had just launched our blog at Boomer Connections, and this was one of our very first posts. Talking to other Baby Boomers like those mentioned in I Love You made us realize we have so many stories to share, so much of common interest. In honor of Valentine’s Day and the impending redesign and relaunch of www.boomerconnections.com, we are publishing it again and wish you all a month of hearts and flowers.

The other day at a networking meeting I met a husband and wife team, Joan a lawyer and Richard a financial planner. We are all Boomers and we got to talking and comparing notes. I am a later Boomer, born in 1962. I am raising a teenage daughter and lost my Dad a few years ago, at age 84. Joan and Richard were earlier Boomers, having graduated high school in 1968. As we discussed our families, the conversation came around to the importance of saying “I love you” and the lessons they had learned, he from a child, she from her parents.

Richard talked about a difficult first marriage and the effect it had on his daughter, who became
surly and distant and caused the family quite a lot of heartbreak. For awhile he felt that his daughter was lost. But he did not give up, and even when he kept getting no response in return, he would give her a hug and tell her he loved her. Now at 30+ and with children of her own, his daughter never hangs up the phone or says goodbye without saying “I love you Dad.” So…they do come back to you if you don’t give up on them! As a parent of a teenager, this was important for me to hear.

Joan’s story tugs at the heart. She told the story of her parents’ meeting during WWII, her dad an infantry officer, her mom a nurse. Her dad was in a military hospital checking in on wounded compatriots and preparing to go back into action, and was trying to get himself together. He looked up to see a sweet nurse with compassion in her eyes, worried about him. Joan passed on to me what became family legend, how there was an immediate attraction and her dad claimed her mom kissed him first, which Joan believes was highly unlikely as her mom was shy and conservative, yet her mom let the story stand for all the years of their lives. I could relate, because my Dad was also a combat wounded WWII and my mom and dad had a similar first meeting story that became family legend. Our dads proudly represented the “Greatest Generation” of men who did their duty and fought and were wounded for their country, then came home and went on with their lives, so rarely showing the depth of their emotions.

Joan’s Dad did not easily say I love you, despite her mother’s affection for him and her need to hear it. Tragedy struck when her mom developed Alzheimer’s while in her 70s and deteriorated over the course of 7 years before it took her life. When Joan’s dad came to see his wife each day without fail, he told her he loved her, every time showing her a happy face and never missing an opportunity to show his affection, even though at that point she didn’t even know his name. He died soon after his wife, of a broken heart, Joan feels. But she learned a valuable lesson, which she passed on to others and puts into practice in her own life with her friends and family: never miss the opportunity to tell your loved ones what they mean to you.

One thought on “I Love You”