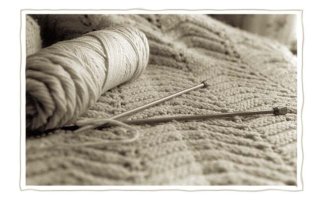 Baby Boomer and knitter extraordinaire Loralee Swab describes a deep sense of satisfaction that comes from creative expression and the mastery of a challenging skill. But what she gained when she followed this pursuit went even deeper. It was the community she discovered—her “people”—that really changed her life.

As an only child, raised in rural Northern Pennsylvania, Loralee was used to being on her own. In her adult life this pattern continued, as she moved frequently to follow her husband’s career. When Loralee finally moved back to her home state and settled in State College, she was already deep into her craft. Although it boasts the huge Penn State University, this corner of Pennsylvania is composed primarily of smaller towns and beautiful farmland. And it was in one of these small communities that she discovered a yarn shop that changed her life. The shop offered knitting and sewing classes, which is where Loralee met the people who now make up her social circle and provide a treasured group of compatriots. Knitting is the vehicle that fostered these deep interpersonal connections.

Loralee finds fellow knitters to have a certain kind of personality…often one that marries both a strong practical and creative mindset. She tells me she spent a lot of her life not feeling like she fit in, but says of her fellow knitters: “They ‘got’ me.” She found this community to be tolerant of others’ quirks and appreciative of their gifts. Part of this, she feels, is a function of age. In general, those in her group are older, their children grown or more independent. They have entered a phase in their lives free of judgment—accepting and secure in themselves—as they seek a meaningful way to express their creativity, and find it though the art of knitting, just as Loralee does. In this group, even those who do not have much else in common, create strong bonds over their shared passion.

Loralee appreciates that she sees no social hierarchy in her knitting circle. It is blissfully free of social pressures. Although the group is firmly centered around the “Boomer” demographic, group members do range in age from the mid-20s to 94. There are even a few men in the group! Loralee is quick to note these men are totally secure in their masculinity. They are “dudes” who find the same satisfaction in this technical and creative pastime that the women find. I loved her description of a recent baby shower hosted by the knitting group, and how the men had proudly gifted tiny, beautifully crafted baby sweaters they had made.

My own grandmother and most of her peers in my small Pennsylvania Dutch community were knitters and quilters. They grew up in a time when it was important to be self-sufficient, and recreation was work that allowed you to get together and talk. Unfortunately, during my youth many of these skills began to die out. None of my contemporaries practiced these arts. But now knitting seems to be trending. It is making a major resurgence. A number of women I know have taken up knitting and I see yarn shops popping up everywhere. Loralee feels part of this resurgence is due to social media. Like her, many knitters worked for a long time in a vacuum, on their own, but then found each other on social media with the proliferation of knitting blogs and knitting circles. As with any other creative pursuit, social media allowed freedom of expression to bloom and grow, as huge numbers of participants shared ideas and encouragement. The social equivalent of the old-time quilting circle has gone viral!

Loralee’s discovery of knitting has been transformational. “It changed my life for the better in every way…except financially.” I can attest to the fact that she spends far too much money on yarn! Luckily, all “mistakes” in knitting are fixable and material is never wasted. Unlike a painting produced with expensive canvas and oils, if you don’t like the end result of a knitting project, you simply undo the stiches and start over. Loralee loves this aspect of knitting. The tweaking, modifying, adjusting and fixing to get it “just right.” She says, “I am a natural fixer!” Watching the progression of her art over the years is truly inspiring, as the creations become more and more intricate and complex, and the yarns increasingly gorgeous. I deeply appreciate every item she makes for me, knowing the time, effort, talent and love that have gone into each one.

What a great story Loralee has to share: What creative pursuits and friendships have you found as your “second act?” Tell us about it!

Be sure to read Knitting Changed My Life, Part 1: The Creative