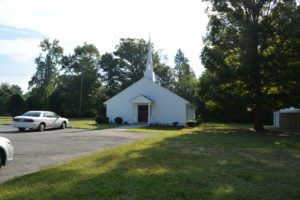 Meet the Wares: A Study in Faith, Strength and Gratitude

I love the fact that I meet inspirational Boomers everywhere. A few months ago I met Diane Ware at a Richmond Senior Network meeting and we got to talking about life’s challenges. In hearing her story about her husband’s battle with cancer and her role as caregiver, I was newly inspired by their story of faith, strength, and gratitude.

During our first conversation, Diane said some words that resonated with me, and I have held them in my heart ever since: “As long as you are living, God has a plan for you.” I believe in this concept so strongly, and it is one of the reasons I entered into the Boomer Connections partnership. It also pushed me toward the endeavor I call The Relevancy Project, the goal of which is to focus on how Boomers can live meaningful lives their whole lives—indeed up to the very end.

When I met with Diane and her husband, William Ware, one of the first stories they recounted involved one of the parishioners in their small rural church, where William serves as pastor: Doris, a lovely elderly lady who Diane says “exudes positivity and sunshine” has, at 93, lost much of her eyesight and after falling, had to move two hours away in order to live with her daughter. Despite the fact that she can no longer attend her home church, she still serves by calling other fellow church members if they have missed a Sunday or two, to ask how they are doing and tell them they are missed. This is actually a valuable service to the church, as people respond to her concern, and it keeps her socially connected. Doris has a mission, and in her own words: “I am blessed and I am grateful.”

As William and Diane told me their own story of how they approached William’s battle with cancer, and described their philosophy and beliefs, it was clear they are the embodiment of some of most basic lessons of our time on Earth: Faith works. Attitude is all. And a life in which service is a guiding force allows you to leave a most wonderful legacy.

Cancer has been rough, and the trials keep coming. William has four separate kinds of cancer, including non-Hodgkin’s lymphoma, which is in remission, and brain cancer which doctors are telling them is in a “watch and wait” stage. The Wares do not have children and few family members in the area, so Diane has huge responsibilities as caregiver. Her response to the challenge: “If I step back from it and think too much about it, it will overwhelm me,” she says. “If I tackle it one day at a time, I can cope with it. God knows what I can handle.”

She reminds herself that everyone has problems, and mentions a friend whose mother is suffering from Alzheimer’s and cannot be left alone, which is terribly hard for the caregiver. She counts her blessings. William is functioning well despite his setbacks. The skin cancer that was recently discovered on his finger is being treated and is bandaged,“ but fortunately he doesn’t play the piano” Diane responds cheerfully. The brain cancer is slow growing and has not affected William’s mental acuity, and he continues his service as minister. “My husband is upright and breathing, and still preaching,” Diane tells me. “I’ve still got him.”

One of the ways she has come to terms with the challenge is by leading a support group for caregivers of those who are critically ill. Another is her gratitude journal, which she started when William first became ill and was rushed to the hospital with sepsis and almost lost his life. It was during this ordeal, however, that the brain cancer was discovered and so could be treated early. “I am grateful I got him to the hospital when I did, because a few hours later and he would have died,” she says. “I am grateful the cancer was discovered early. I am grateful a friend, whose husband had also been ill, gave me the idea to keep a journal, where I started to write down everything about his treatment and medications. I was grateful for my friends who guided and supported me.”

Diane got her degree from Ozark Bible College in Joplin, Missouri. Her first job was at Standard Publishing, a religious publishing company, where she came to focus on the Vacation Bible School (VBS) curriculum. William graduated from Milligan College, and over the years went back and forth between jobs within and outside of the ministry. The path William and Diane chose was not easy from the start. When they married, she had to adapt her life significantly to fulfill the role of minister’s wife. Yet she always felt that “If you believe you have a mission, you need to find a way to do it no matter what.” It became clear that a life in ministry would be difficult financially and she continued her work in VBS consulting, where she now trains the educators who will be using the curriculum to teach children. She values her role in education, especially delivering religious education to children. She also runs a women’s retreat with three other women, where the focus is on the importance of leaving a legacy. “You leave a legacy whether you realize it or not,” she notes. “The person you are filters out into succeeding generations.”

William is also a man of influence, who firmly reinforces Diane’s perspective on life. Every week he prepares a sermon to deliver to his congregation, as he has done for 40 out of the last 50 years. He rarely has delivered the same sermon twice. Despite his physical setbacks, he speaks about the importance of living your life in anticipation of the future, and not dwelling on the past. He speaks of the importance of having something to do, something to live for. Next year is an anniversary year, as Diane turns 70 and they celebrate 40 years of marriage, and a major trip is in the works: They plan to travel to Amsterdam, Budapest, and the Ukraine and then England, in order to visit missionaries they support. Of course, the cancer treatment is a question, but Bill’s philosophy is simply this: “I want to live my life.”

There were moments of questioning along their journey, but always faith was the guiding hand. Diane admits that she never experienced that “bolt of lightning,” or what some describe as being called. But Bill has always believed they were working for God, by giving people information and resources and prayer. This belief has held fast through their life’s work and recent challenges: “God is still working even now. Cling to that and you can’t be hopeless.”

As we wrapped up our time together, I asked both Diane and William for their thoughts on the concept of staying relevant as we age. William expressed that staying relevant is a choice, you have to want to. He warns Baby Boomers against failing to pay attention to both the younger and the older generations, and suggests appreciating what they have to pass on while avoiding their mistakes. He thinks about a friend’s 90-year-old mother who had been active her whole life and when she ended up in a wheelchair, simply faded away. He has read a lot about working with “Millennials” and trying to understand what motivates this generation as they move into leadership positions in our society.

Diane talks about how she stays relevant through her continued involvement in VBS education, which she feels is a great introduction for children into faith and church. VBS provides opportunities to get Seniors in the church involved as well, putting together craft packets and similar activities. She too believes continuing to live a meaningful life is a choice–being positive or not is a choice. She advocates being able to adapt and adjust your attitude without devaluing all you have learned in life: “You can lead bible study from a wheelchair,” she points out.

I can’t help but see, in Diane and William, that through service you leave a legacy that sends ripples throughout your life and the lives of others, in ways you may never even know. And I see the value of gratitude, a positive attitude, faith, and trust. Even after all they have faced this past year, Diane says in closing: “There is always something to be grateful for, always something to share a laugh over. Everyone questions in their lives where God is going with all this, but I believe as long as you are alive, God has a plan for you.”