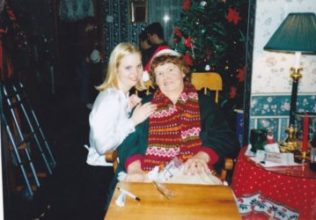 Inspirational Boomer Series: Who Inspired You?

This series is about Inspiration. We ask Boomers and those working with Boomers “Who Inspired You?” We want to talk about people who made a unique impact in your life, and pass on the lessons they taught you—and through the story lend new meaning to their life and legacy.

As told to Cherie R. Blazer

Sheilah Augustine is an active Realtor in the Richmond VA market. As a Senior Real Estate Specialist (SRES), she has worked with many Seniors and Boomers who are helping their Senior parents, downsizing and selling homes they have occupied for a lifetime. Sheilah’s decision to work within this demographic grew, in large part, out of the close relationship she had with her grandmother, Mary who was called  “Nana” by her 11 grandchildren.

Born Mary Anne Roddy in County Roscommon, Ireland, Mary came to the United States in 1929, just one month before the stock market crash. She came here alone, at age 17, via the Port of New York City. She had never been on her own before or out of her town Ballaghadreen. She took the train to Philadelphia’s 30th Street Station, where an aunt whom she had never met, was to pick her up and help her transition into her new life. Nana’s guts and determination showed itself over and over during a lifetime of hard work and perseverance, that she took on with a fierce sense of independence.

Mary’s is the great American story reflected in the lives of so many in the wave of immigration during the first few decades of the 20th Century, and she embodies the proud spirit upon which our country was built. Sheilah’s strongest impression of Nana was her deep love of her adopted country. The United States represented an unlimited opportunity to her, where you could be anything you wanted if you worked hard enough. She came here with that sense of hope and optimism and it never failed her no matter the difficulties she faced. Sheilah’s work ethic and attitude are a reflection of her Nana’s influence.

On the 1930 census, Nana’s occupation was listed as “Servant.” She worked as a domestic for a family for some years, until she married at 27. During a span of 4 months in 1942, she had lost her husband and a baby leaving her a widow with a young son to raise. During World War II, more jobs became available as men went off to war, and Nana found a job in the post office, where she met her second husband.  They got married and Mary gave birth to 3 girls within 3 years, the youngest of which was Sheilah’s mother.

At no point was Mary’s life easy. She worked often two jobs, saving and scraping in order to send each of her children to Catholic school. In 1966 she had saved enough that the family was able to buy a home, in Northeast Philadelphia.   Coming from a background of farmers in Ireland, she loved her home and felt she had a great life, no matter what issues she had to deal with. She worked until age 67, and was proud to be able to treat each of her 11 grandkids with a TV on their thirteenth birthday. Sheilah loved the TV so much she kept it until 2002 only letting go after it was damaged in a thunderstorm.

When asked to identify Nana’s most significant legacy, Sheilah says it is a sense of gratitude, that pushed her to come alone to a foreign country, despite her parents’ protestations, because it offered to her and others like her absolutely unlimited potential and opportunity. “It’s about self-reliance…you come to this country and you can do anything you want to do.” She was so grateful for everything she had and never complained, and didn’t appreciate hearing complaining from others.  She had been close to her family and missed them, especially her own grandmother. She only returned to visit Ireland once in her lifetime.

Nana’s life was all about her children and then grandchildren. She was a strict disciplinarian—and her presence commanded respect says Sheilah. Mary had a very strong personality.  Sheilah felt a special kinship with her grandmother since as far as she can remember. She could be herself more with her than with anyone else. While tough, she was also young at heart and an understanding confidant. She loved music and always told Sheilah to never stop dancing.  When her family moved to Richmond as Sheilah turned 19, her biggest issue was leaving Nana. “I would drive back to Philadelphia and spend every weekend with her,” says Sheilah. “I just wanted to see her. She would tell me her stories, I would tell her about my life.  I’d go up and sit with her and have a cup of tea and Entenmann’s cake. She told me she liked me there but said I needed to make a life in VA. She showed me it was time to move on and focus on my future, not the past.“

It was extremely difficult to see Nana, such a tough, larger-than-life individual start to age and fall ill. She just wanted to live and enjoy life on her terms and she died in March of 2003, her family all around her, and her mind sharp and clear til the end.

“I feel she is still with me,” says Sheilah. And indeed her career has been influenced by the connection she felt to her grandmother, and consequently the respect she feels for older people. Sheilah gravitated to working within the Senior market. Before becoming an SRES-designated REALTOR, Sheilah worked in ad sales for a senior publication. When she interviewed for the job, she admitted to having no experience in the field “however, I can learn” she told the employer. She learned how to get in front of clients and sell—she made her own way, just as Nana did. She transitioned into real estate because she found it to be entrepreneurial, a career in which you can determine your success, which is what Nana loved most about this country.  “I take customer service to a whole different level as I work with Seniors because I have so much respect for them, I also have patience because of what Nana taught me. I love their stories.”

I asked Sheilah: What’s the difference between Boomer and Senior real estate clients? Boomers are often Internet savvy, and big researchers, she notes, while Seniors appreciate a personal touch, like phone calls—and the hand-written notes that Sheilah is famous for. Seniors tend to be more loyal and need more time to make decisions, Boomers more research minded and quick decision makers.

With Seniors, the real estate process is often time-consuming; they have lots of questions and make decisions carefully and deliberately, and she typically does a lot of counseling. Constant communication is key. “My connection with Nana has helped me take the time and energy to understand people and to identify their goals, and to keep the transaction as stress-free as possible,” says Sheilah. “I feel like I am the right person for the job, and I get a lot of satisfaction knowing I was able to make a difference.” Sheilah sees herself more as a consultant rather than a salesperson.

As we wrapped up the conversation, Sheilah reflected that every aspect of her life has been influenced by her grandmother, and she is grateful for all Nana passed on. “Now I think back, and I have so many more things to ask her.” But if you get to know or work with Sheilah it is clear…Nana did good work, and she would be proud.