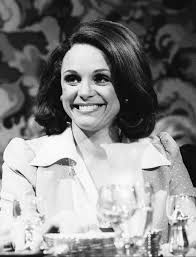 Rhoda Changed My Life: An Interview with Camille

Camille LaCognata was born in NYC. As you can infer from her last name she was the child of an Italian American family and grew up in a neighborhood strongly Jewish as well as Italian. She spoke a specific language in a very specific voice. Around age 22 she moved from the cocoon of the “neighborhood” to a totally different world: California. The change was overwhelming, made even more so by her feelings of displacement, feeling like an outsider. Her new colleagues teased her about her pronounced New York accent and while it was harmless ribbing, it made her feel insecure. This insecurity was painfully magnified when she had a telephone interview for a job and the HR rep told her she “sounded illiterate.” Wow.  One person’s prejudice wrapped in absolute rudeness.

A short time after Camille’s relocation, the Mary Tyler Moore Show made its debut. Suddenly that New York accent became popular, became cute—Rhoda and Mary were so darn likeable. Camille describes this show as life changing for her in that her accent became more accepted and mainstream, thanks to the media—one of many instances in which the media is responsible for a sea change in public opinion. Because of Rhoda and other shows set in NYC, this accent was widely heard, and Jewish terms became part of the lexicon. I use words like schlepp, kvetch, nosh, schmooze all the time and never even think about where they originated. But Camille is very cognizant of language and accent because it truly affected her life deeply.

The story is even more meaningful in that years later, Camille got to meet the actress. Valerie Harper was performing a one-woman show in Los Angeles and Camille had the opportunity to greet her after the performance and tell her, in person, how her character finally gave her someone to relate to at a point in time where she felt like a stranger in a strange land. Interestingly, Valerie has no accent at all, that was pure Rhoda.