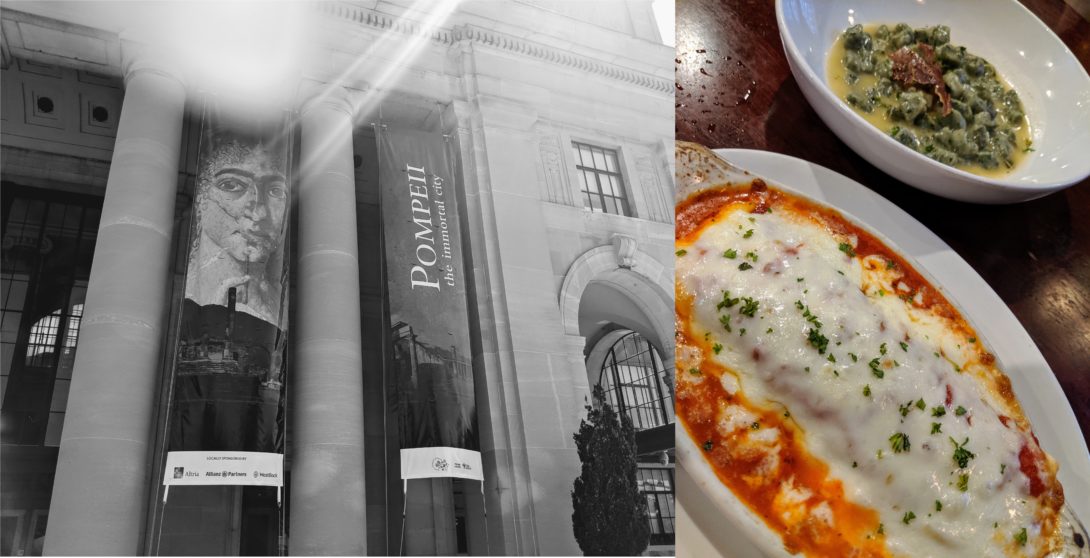 We decided on a Mediterranean theme for our Friday Foray in Richmond this week. Our Science Museum of Virginia is hosting an exhibit called Pompeii, the Immortal City. However, it closes September 3, so Richmonders and visitors—hurry if you want to see it!

I hadn’t been to the Museum in ages. My daughter is 21 now and for the first decade of her life, we haunted this place. Those Friday Forays were very different, but just as special. The neighborhood moms and I initially took our preschoolers to the Children’s Museum across the plaza, but as they got older the Science Museum was the thing.

Three floors of hands-on learning drew in my daughter and her friends—so much to learn, about so many things. There were summer camps, and even birthday party sleepovers in the Rotunda. We also enjoyed the fabulous Dome, which offers “the most technologically advanced digital dome theater in the world” to view the stars in the sky, and various IMAX films.  We spent so many hours there during my daughter’s childhood that honestly, I got overloaded, and stayed away for quite a while, as other pursuits took precedence in middle and high school.

But…WELCOME BACK! I had forgotten what a beauty she is, this wonderful Museum, another reason why we are so lucky to live in Richmond.

I was looking forward to returning for another reason. When I was in college during my junior year abroad in Italy, we traveled to Pompeii and Herculaneum, so once again, in another way, a trip back in time. It was kind of an emotional day. Boomers, I’m sure you know what I mean and how it feels, visiting an old haunt and fondly recalling those people and places. It happens a lot, doesn’t it?

Welcome to Pompeii: A Step Back in Time

Wonderment, disbelief…these words seem appropriate in attempting to take in the phenomenon that was Pompeii.

As you first enter the exhibit you truly do feel like you take a step back in time. As the doors close and you view the virtual reality video—an “immersive experience”—you feel transported. When I was actually in Pompeii for real, I remember the incredulity of wandering through the entire excavated cities of Pompeii and Herculaneum, also feeling transported back into the year 79 A.D. It was eerie and unsettling, as much as it was fascinating. 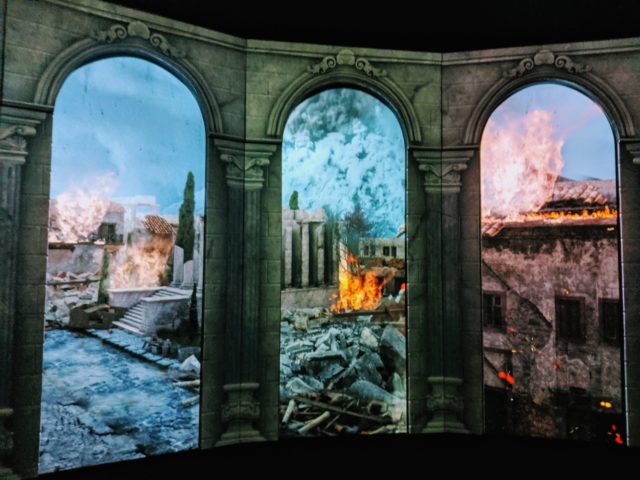 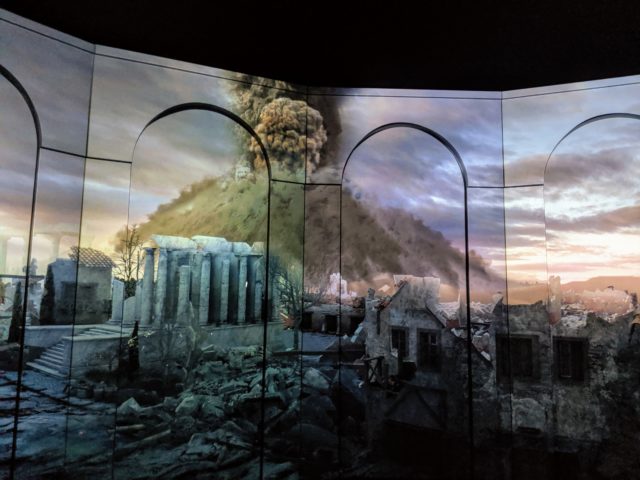 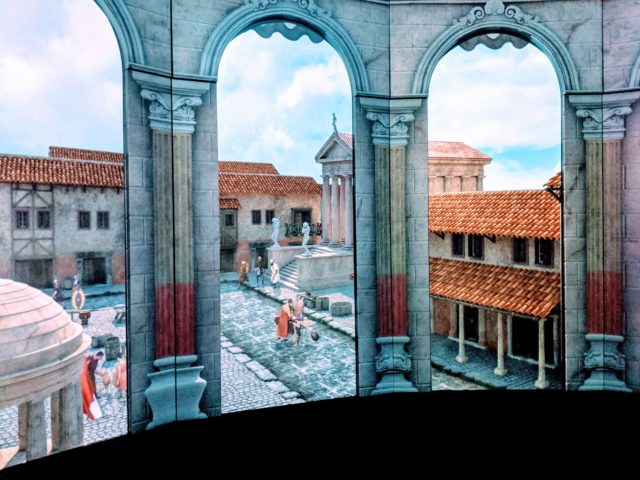 On that visit in 1985, I spent the day walking the excavated city, visually trying to take it all in, getting a real feel of what life was really like before the huge eruption of Mt Vesuvius. But I don’t remember learning a lot of facts or absorbing the deep historical significance of these sites. So now I was about to get educated. The Pompeii exhibit at the Science Museum of Virginia includes numerous actual artifacts—many being exhibited for the first time in the U.S.—which reveal incredible detail about the society and culture of this age.

It was truly a priceless archeological experience because the city was buried as it stood, frozen in time, as the rapidly moving eruption from Mt. Vesuvius engulfed the city with too little warning for citizens to escape. In the city, bodies were excavated that were completely covered in ash where they lay, as they tried to escape, preserved for millennia. A replication of this gut-wrenching visual is found in the last room of the exhibit. 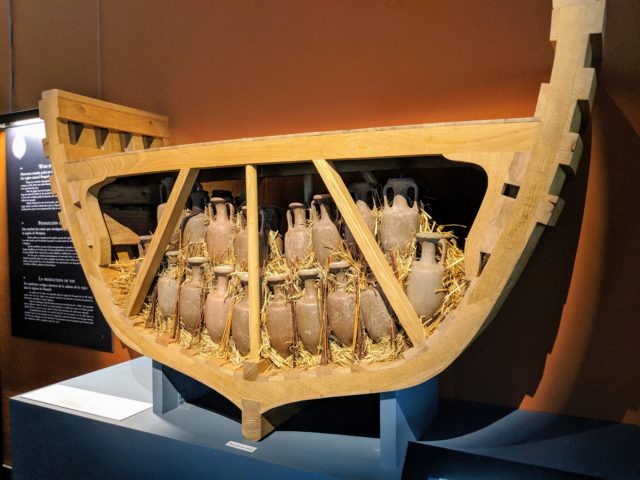 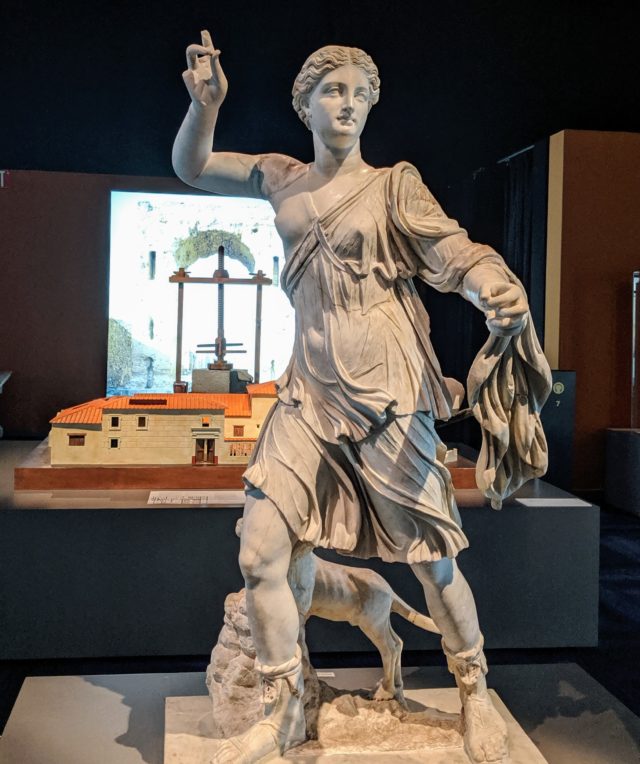 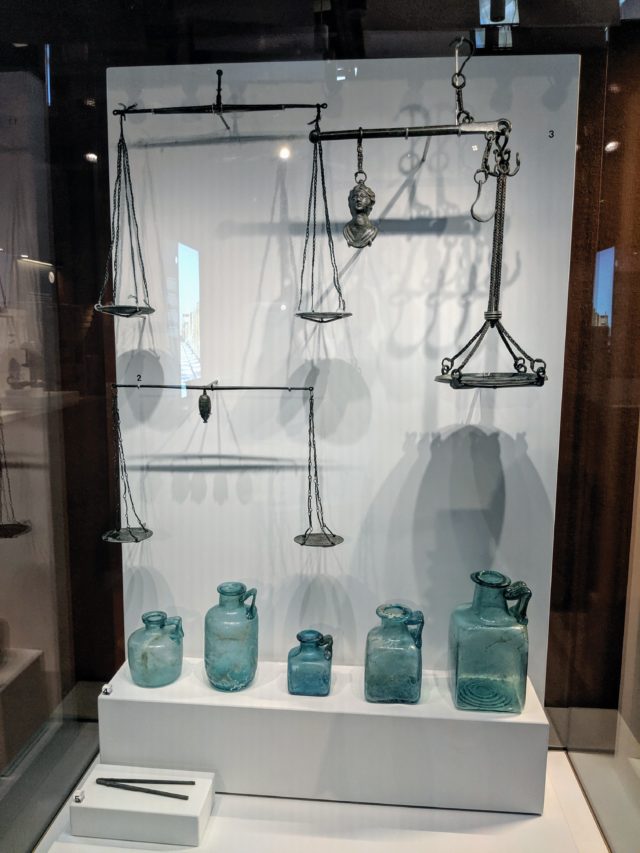 The unearthed cities of Pompeii and Herculaneum reveal an incredibly advanced civilization—for the year 79 A.D. The exhibit tells the story of innovative building, farming and medical techniques, as well as advanced city water management. As you look at the finely crafted metal and pottery, jewelry and tools you get a glimpse inside day to day life in the “immortal city”. By visiting this exhibit the other day, I finally got the missing details. After all these years I could knit the experience together as I recalled actually walking the streets of the once-buried city. This exhibit is riveting and educational, well worth the trip.

The Science Museum of Virginia: A State Treasure 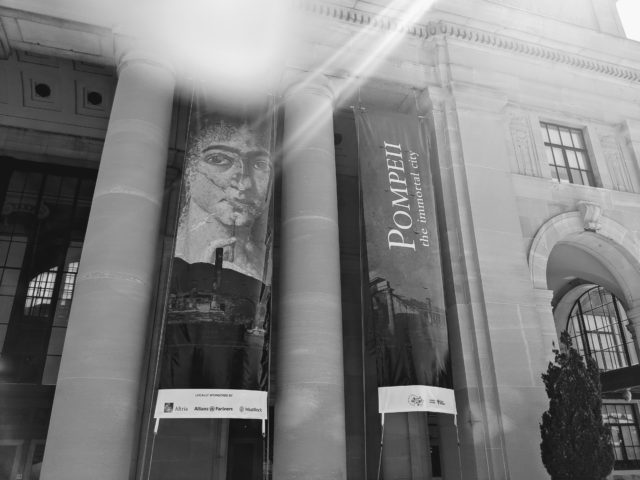 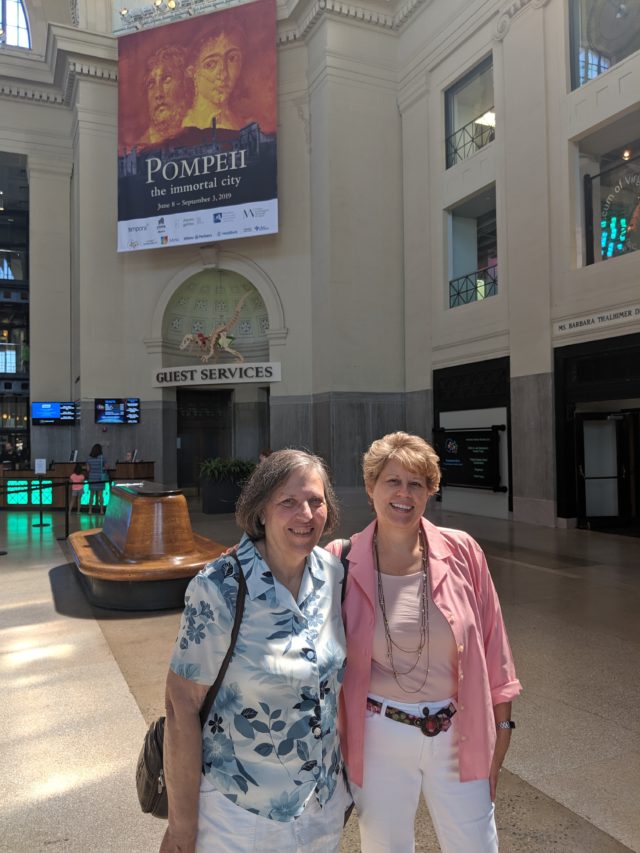 As we left the exhibit, I stepped back for a moment to appreciate this space all over again. Built in 1917 as The Broad Street Station, it joins other grand metropolitan train stations of this era (think Grand Central in NYC, 30th Street Station in Philadelphia), as an American architectural treasure, in ornate Neoclassical style. I love the signage that still remains over the archways, directing passengers of yore “To All Trains.” 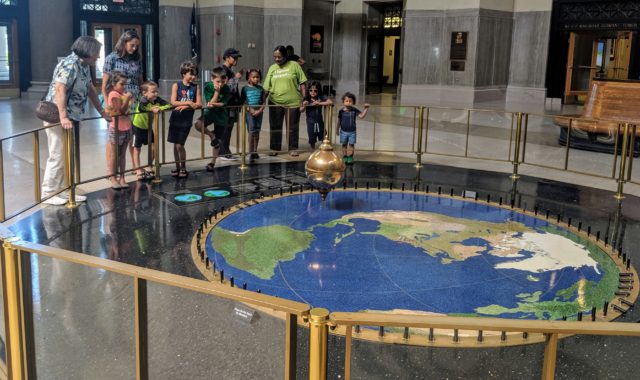 We went back into the Rotunda, which houses another wonderful site: the Foucault Pendulum. We paused there to join a group of kids, intrigued as they learned how the pendulum tracks the rotation of the Earth. 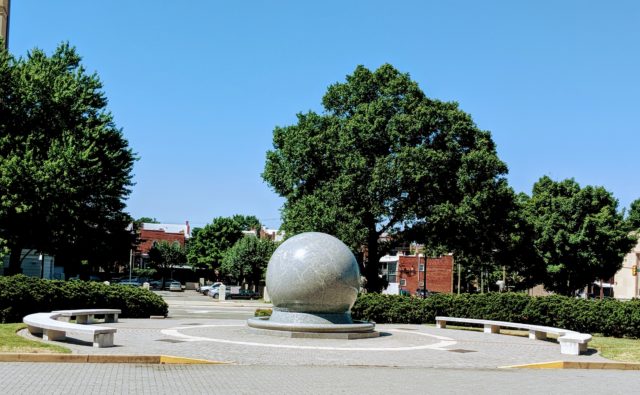 But wait! Let’s step outside: The outdoor entrance of the Museum contains the unique and world-famous Grand Kugel: a massive granite ball suspended in water that can be spun by the slightest touch. According to AtlasObscura, the Kugel ball, shaped out of South African granite, 9 feet in diameter and weighing 29 tons, is the largest construction of its kind in the world. It is “comprised of a perfectly spherical stone ball that is set into a matching perfectly concave cup. Water is forced from the bottom of the cup creating an evenly distributed, incredibly thin layer of water. The ball, no matter how heavy, can then be moved on the liquid surface as though it weighed nothing at all.” Even more awesome is that the map of the world is etched on its slowly revolving surface. It is just beautiful, magical—especially on this brilliant summer morning.

(By the way, check out online AtlasObscura, “The definitive guide to the World’s Hidden Wonders” – a valuable resource when planning your bucket list adventures.)

After enjoying the exhibit, Camille and I were off to lunch at one of our local favorite Italian restaurants, Palermo’s, whose tag line is: Not simply good food but a cultural experience. Well, that sounded perfect—a continuation of today’s Mediterranean theme. The owner, Marianna Merki, takes her life’s work very seriously—you can tell by the quality and the “heart” as we like to say, that we found in this place. A taste of old Sicily. 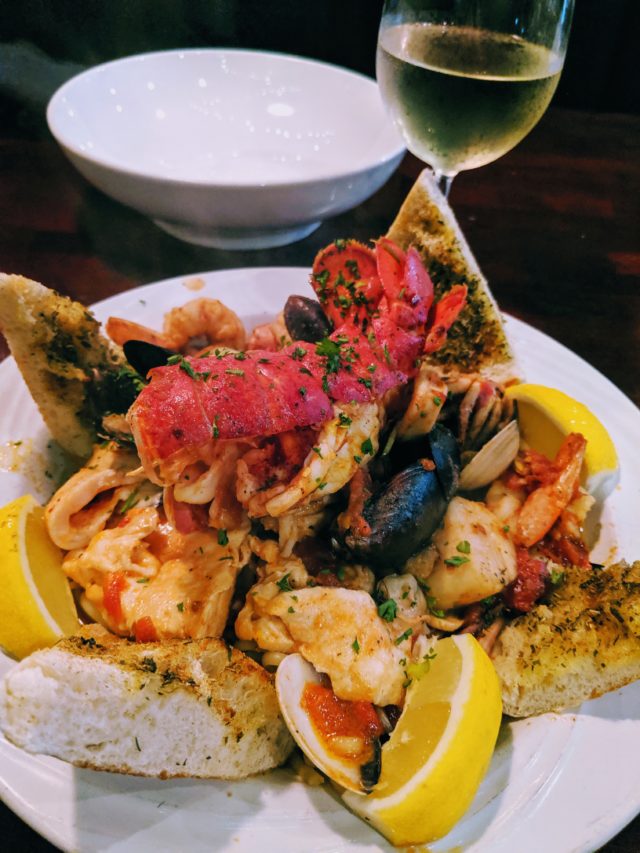 My visit to Palermo’s a few weeks prior with my husband had been delightful. We had a waiter named Christopher, also known as Nick, who made the experience as well as the food a happy one.  I ordered my selection the name alone: Castellammare: Isn’t that beautiful? It lived up to its engaging name: scallops, clams, mussels, calamari, shrimp, lobster and catch of the day in fish stock red sauce. Oh yeah. With the house Chianti, that dinner was the start of a very good Friday evening. 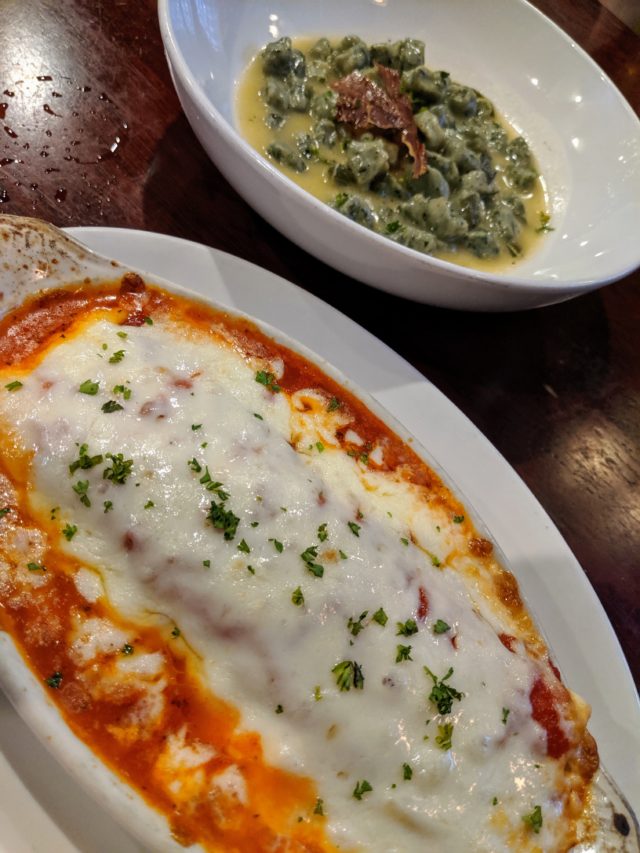 For lunch this time, Camille and I were more conservative, but only slightly. Camille got the Gnocchi Verde, potato pasta dumplings in a sage butter sauce topped with prosciutto chips, and I got the decadent manicotti—a house favorite that arrived smothered in bubbling melted cheese. And not to forget the garlic butter bread knots Palermo’s serves with the meal. Delicious. This lunch was not low-cal, but it sure made falling off the diet wagon today worth it. 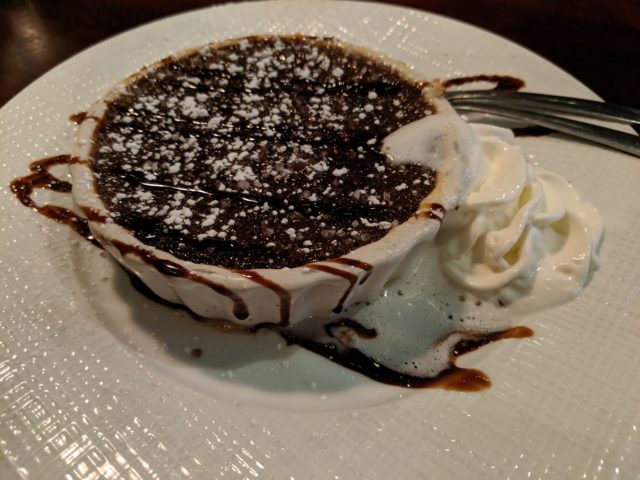 When Camille and I foray, the diet goes to hell, and we just enjoy the day.

By the way, happy hour at Palermo’s starts at 5 PM.

Pompeii and Palermo’s, another great Friday Foray in our fair city. Check out the Pompeii exhibit until September 3, Museum hours are 9:30-5, open all 7 days. Palermo’s opens at 11AM and serves dinner 4-9PM.