After being inspired by one of my partners’ article about “Wandering”, I thought I would let you in on one of the best places I’ve been: The Great Smokey Mountains.  The Smokey Mountains are not far from my home state of Alabama.  It takes us a couple of hours to drive up to the great state of Tennessee.  Although I didn’t do much traveling before I married, I really enjoyed traveling through the mountains after my husband and I moved to Virginia. 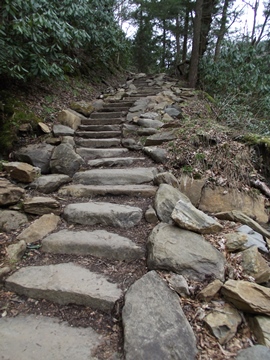 We wanted the children to see some of the countryside, to keep them from being bored during the long 14-hour trip, since we would be driving back and forth to visit family, especially their grandparents.  So, we would stop and have lunch in one of the state’s parks or near a famous site.  Although the spots we choose were planned with the children in mind, I found myself enjoying them more than the children did.  Maybe, it was because of their ages, they did not see the beauty of the sites and enjoyed playing instead.

I recall one summer, after we dropped the children off to stay with their grandparents for the summer, my husband and I drove up the Smokey Mountains to a place called Twin Chimney Tops.  We decided we would hike the trail that led to the top of the Twin Chimneys.  We started out at the bottom and about a fourth of the way up, we had to stop and rest.

At that point, a few people were on their way down and encouraged us to make it to the top.  They said you will not regret it.  An hour later when we stopped to rest again, a lady older than we were said, “I almost made it to the top but it was too much for me.”  We looked at each other and thought “do we really want to do this?”  Once we reached the top, the view was more beautiful than words can say.  All I can say is, you owe it to yourself to see the view for yourself.