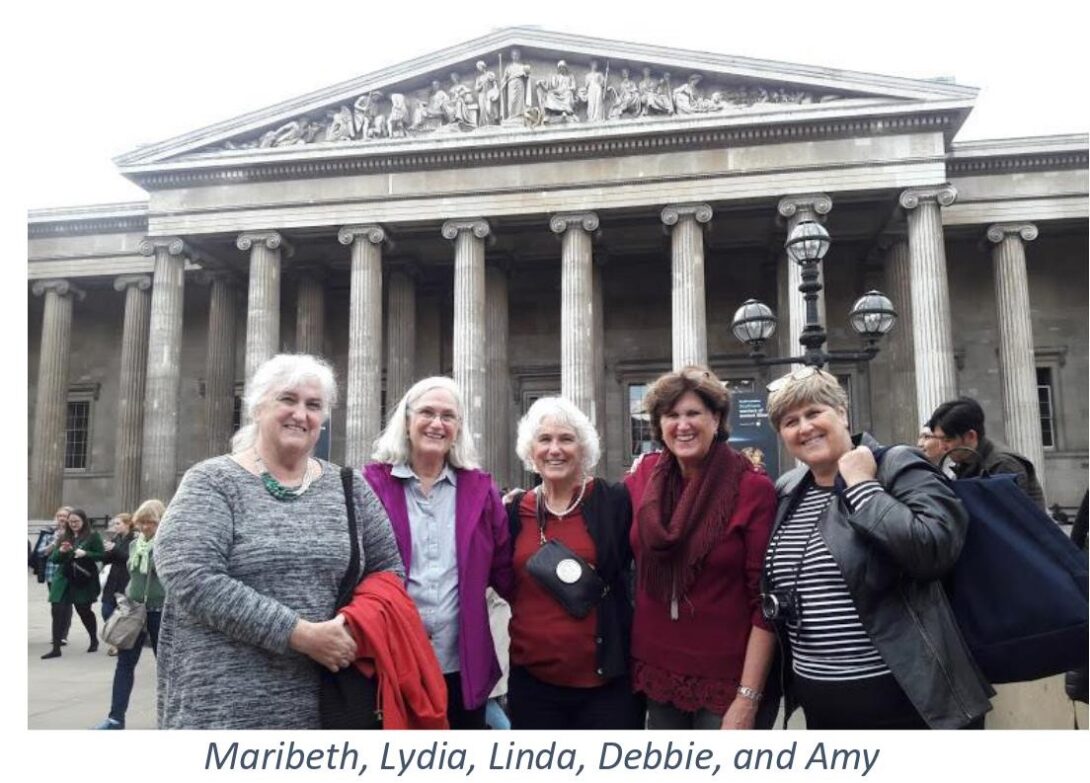 Whirlwind Trip to the British Isles

I have been blessed with many fun travel times, most in connection with my far-flung children, but the following adventure is about a trip I took in 2017 with my sisters.  I have four sisters and two brothers. We ditched the latter because they have had many travel opportunities!  My mom loved to travel, and she made trips to Israel, London, Moscow, Japan, and Venezuela, among others. Much of her travel was done after she was widowed at 65 and she got her driver’s license. She was unafraid and went to many places without family on tour groups.  What an inspiration! She lived the last 3 years of her life with me, and when she passed away and left a small inheritance to each of her children, we girls decided a trip to the British Isles would be a great way to use some of our inheritance and honor her. We just wished she could have been with us.

My oldest sister, Linda, who lives in Oregon, came up with the idea first, as a trip to see ancestral places. We all quickly jumped on the bandwagon. She made an elaborate plan with some help from Maribeth, who had already traveled in the British Isles. Debbie arranged for a van to carry us and all our luggage. Amy, the youngest, had the courage to drive on the “wrong side of the road” down narrow lanes. I was still busy closing out Mother’s estate while they planned. 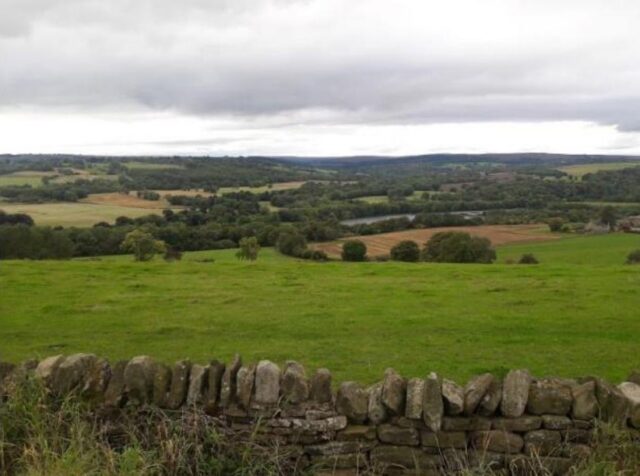 In retrospect, the plan was far too ambitious for the two weeks we had to spend. It left us wanting to go back and spend more time in each place. But what a trip! We often drove 5 hours a day and arrived at our destinations after they were already closed. No matter: the scenery was breathtaking as we drove by rock walls, sheep-filled pastures, mountains, rivers, and hedgerows too high for the livestock to escape. We stayed in Airbnb’s where the cottage gardens were exquisite, as was the hospitality of the proprietors. We would not have missed a minute of it. 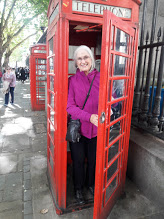 We arrived late Friday night mid-September. Linda chose that month because, according to her research, there was less rain that time of year, which turned out to be true. During the short time we were in London, we saw An American in Paris at a theater on the West Side. We were enthralled.  Getting there by subway was an adventure in itself, giving us our first experience with friendly folk in that country. As we stood looking confused in front of a subway map, we were joined by someone willing to help us figure it out.  They probably recognized our accents, and everyone was intrigued with the idea of five sisters making this trip together.  After the play we rode on a double-decker bus, touring the city, seeing the sights and ended at the fascinating British Museum.

Now it was time to seek our ancestral places. We left London to head for Kent and Haddon Hall, an ancient estate from which a great-great-great-grandmother in our Vernon line had eloped. On the way we stopped in Greenwich to see the Prime Meridian and Tunbridge Castle, where some of our Norman ancestors may have lived.  We also stopped off to see the White Cliffs of Dover and the beach on the English Channel where the Normans landed to begin their 1066 victory over the Anglo-Saxons in England.

We stopped the next day in Canterbury to see the Cathedral there, where surprisingly the shops are snuggled up right next to it.  We finally made it to Haddon Hall, just as they were closing the castle for tours. But the gift shop was still open! The very sweet young lady who greeted us there was kind enough to take us down to the exterior of the castle and into the gardens when we told her our story.  Perhaps that was because we did our best to buy out the gift shop while there. We found out from some of the literature we purchased that part of The Princess Bride had been filmed there. The gardens with their glorious colors and topiaries and the outside of the castle eased our pain. So awe-inspiring! And of course, there were books to purchase with pictures of the interior.

More ancestral lands to explore in Scotland.  We stopped in Jedburgh where we found an ancient monastery with a war memorial monument outside containing some names from our Scottish family history, and the home of Mary Queen of Scots nearby. We spent that night in Edinburgh where our hosts led us to the Italian restaurant they owned.  It seemed a bit out of place, but the food was delicious.

Whew! We got up the next morning and spent the next day in Edinburgh without hurrying off somewhere else. And yes, we did buy cashmere scarves while there, sticking mostly to our Stewart ancestral Tartan plaid, but I did make an exception with a gift for my daughter who had married a Campbell.

The next day we took the ferry to  Northern Ireland, where we were able to watch weavers ply their trade on giant looms and see fabulous shops with their blankets and shawls for sale. Too bad we did not have room in our luggage! We ended the day in Kinsale, Cork County where we found the most delicious hot chocolate and scones in the British Isles.

In the morning, we started wending our way back down toward London, spending the next night in Wales, but we got to our destination so late that we could not find an open  restaurant. Surprised? No matter. There was a pub open. Imagine the faces of the all-male clientele as the five of us filed in to take an open table in the back.  Some even made their way over in their friendly, inebriated fashion to make us feel welcome and to find out why we were there. The wife of the proprietor was Thai, so that was a welcome option on the menu since we had already enjoyed fish and chips on several other occasions.

There was so much more gorgeous rugged scenery in Wales, but as we headed back down towards London, we still had Shakespeare’s Birthplace at Stratford on Avon to visit and gravestone-rubbing to do at a church in a community where we knew some of our ancestors had lived.

After another lovely stay at a bed and breakfast, I sadly had to leave my sisters to take a train to London and meet my husband, whose ruffled feathers at being left in Virginia could only be smoothed by a promised meeting in London to go down to his ancestral home in Wales. This story is long enough, but perhaps another day…

Lydia is the third child in a family of seven children who grew up in Varina. She and her husband, who grew up just across the river in Chester, have 5 children and 16 grandchildren. The daughters and 13 of the grandchildren all live west of the Mississippi. One son, after several years overseas, now lives in Ashburn, Virginia with his wife and 3 daughters. Her youngest son is in Istanbul, Turkey for now teaching English. He loves to travel and has lived in other places and plans to continue that trend. Lydia has been a member of Altrusa International of the Capital City of Virginia for 20 years. My profession was teaching middle and high school English, the last 14 years in a Virginia Juvenile Correction Center.