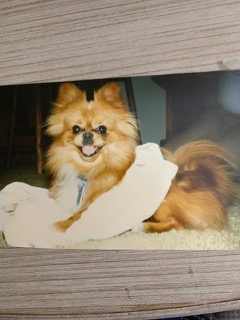 While flipping through Facebook entries, I noticed a dog that reminded me of one of my precious friends who had passed. A flood of precious memories overwhelmed me. I’m thankful that I had the opportunity to experience quality time with each of my beloved pets.

The first dog in my life was well-named Friskie. He was an exceptional escape artist for a beagle; I recall many times when the whole family searched for him in our Ohio community and while we were on vacation trips. Eventually, he broke free to continue adventures alone.

Duke was a stray black and white collie who adopted our family while I was a teenager. Early into our relationship, he followed at some distance my sisters and me as we walked the sidewalk to the post office in rural West Virginia. Suddenly, a vicious Doberman leaped from an embankment to attack us, but Duke met him while in the air. They fought hard, and Duke won that battle. From then on, we considered him our dog. We never walked without his protection again. Duke had one bad habit however; he loved to chase after Volkswagens, trying to bite their bumpers, which eventually led to his demise.

Rusty was an adorable and mischievous little rust-colored Pomeranian who my husband found while we lived in Pulaski, Virginia. We think he had jumped from a car, breaking his leg. He was in terrible condition until our veterinarian cleaned him up and repaired the leg. We advertised, but nobody claimed him. Rusty loved to growl at big dogs while I held him in my arms, scaring me to death. But I soon realized that big dogs are usually very gracious to silly little dogs who challenge them. Rusty loved to grab the end of the toilet paper in the upstairs bathroom, and then run down the stairs with a trail following him. He was a part of our family for at least eight years, while my children were growing into their teens. Sadly, he was stolen from us and we don’t know what happened to him.

Reno was my great big lap dog, a black and white Siberian Husky with blue eyes. That all changed when he and I moved; he could not adjust to the change. I tried to make our new home a good fit for him, and finally consulted a veterinarian for advice. Per instructions, I built an enclosed kennel and bought a female Siberian Husky to be his companion. That worked well, thank God. Shenna was a solid white Siberian Husky with brown eyes. They made a great team! They loved to run down my stairs together, vibrating the house like a stampede of horses. One time these two got into a fight in the back seat of the car while I was driving. Finally, I had to pull over onto the shoulder and fuss at them. Shenna responded, fussing back, and I pointed my finger at her, saying, “Don’t you talk back to me!” For the rest of the ride, they each looked out their own window, saying nothing.

Early one Sunday morning, they escaped their kennel. Knowing that a pair of large Huskies on the loose could be scary for the neighbors, I considered this an emergency. I ran out of the house after them, desperately trying to catch them as we ran all over the neighborhood. Finally, I realized I only needed to catch Shenna, and Reno would follow. I grabbed her, and walked her home, with Reno following. Once home, I realized I was wearing the most ridiculous pajamas I had. Of course, the next day a neighbor commented, “We enjoyed watching you walk your dogs Sunday morning!”

I had a terrible time getting Shenna bathed. Finally, I came up with a good plan. I attached her leash to the outside of the pen and asked a neighbor to hold the water hose on her while I washed. Within seconds, Shenna had her and me tightly bundled together on the ground, with my neighbor still watering us!

Although I loved them, I had to face that Shenna and Reno were too much for me to handle, and they weren’t getting the exercise they needed. I let them go to a family with acres of land to run on, as difficult as this was I felt it was best for them. 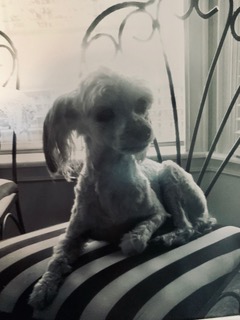 Sable, a white Powder-Puff Chinese Crested, was my sweet companion for many years. She was prissy and expressive. When angry with me, she literally stuck her nose up into the air, and would have nothing to do with me for a while. At one point I had her in a kennel while I traveled and when I returned, it was three days before she warmed up to me. Another time I remember I had to crawl under the house to investigate the underside for moisture. I dreaded the task, fearing spiders and snakes. When I finally mustered the nerve to do it, Sable crawled under there with me.

When my husband and I got together, he had Nickie with him, a very smart little rust-colored Yorkie. Everyone loved Nickie! At first, he and Sable had terrible arguments, and she would snap at him if they ate together. But after some time, he was very kind with her; he would be the one to let us know when they needed to go outside or eat. They loved to go to work each day with my husband, and that’s how my husband stole Sable’s heart. She was his dog from then on.

Nickie did things I had never seen a dog do before. One time while we had a friend and his two Shih Tzu’s over, we saw Nickie actually ‘tippy-toe’ through the kitchen so these gals wouldn’t notice. He seemed to play ‘Charades’ with us when we couldn’t understand what he wanted.

Nickie was in an accident at work one day, and everyone was saddened at his passing. He was about eight years old. During the first few weeks after his passing, we had a few mishaps of forgetting to take Sable outside, or to feed her. She seemed to have forgotten how to let us know; we had to put her on a schedule. Sable continued to go to work with my husband every day. She lived to be seventeen and a half years old when she passed, and it was very hard for my husband to bear.

So many wonderful stories of our dear friends. Did any of these stories cause you to have fond memories of your own pets?