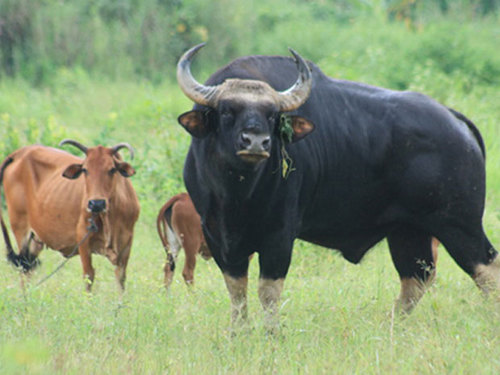 Boomer Memories: Who Let the Cows Out – Especially the Bull?

I was burning up hot! Sweating profusely!  At age 10, it was the first time I actually heard my heart beating, although it was more like thumping.  As the oldest of five, it was my job to “watch” my three brothers and one sister and “mind” the house.  I had convinced my four siblings (all of us two years apart) that we needed to get under the bed. That seemed to be the safest place for us at the time.

It had been about ten minutes earlier that the oldest of my brothers, Sam Jr., had seen the bull coming down the path near the fish pond, with two cows following him.  They were headed towards our house! Home alone, that struck awesome fear in our hearts! We had heard about how mean the bulls were, subject to chasing you, even if you weren’t wearing anything red.   Sam Jr. yelled for all of us to come inside and close all the doors and windows.  We had no air conditioner (something we had never even heard of until we started going to school in town) or fans, and it was almost suffocating under that bed.  My two-year-old baby brother, Todd, was not fully potty-trained.  Being under the bed alone in the middle of summer would have been bad enough, but with four other siblings including one needing a diaper change, it was pretty unbearable! Todd was crying.  I don’t know whether it was because he lost his two Oreo cookies while running to get under the bed, or if his diaper was really irritating him, or if he was really afraid of the bull.  “Be quiet!,” I whispered to him and the rest of my siblings, as I was afraid the bull would hear that there were people inside and come barging through the door.

This was the early 1960s, and we were living in the country in a rented four-room shack on the property of the Shelton family.  We were not sharecroppers, although Momma sometimes worked in the fields.  Daddy had died suddenly a few months after Todd was born. Momma said he worked too long and too hard at the sawmill in town.  So when it wasn’t harvest time, she worked up at the “big house.”  Our house was just down the foot of the hill from the big house.  Before Momma left this particular morning, she must have known that none of the Sheltons would be home because she had told Sam Jr. to watch the clock and that when both hands pointed to 12, to start walking up the hill to the big house.  She had intentions of meeting him with a bag of goodies.   And what goodies they were!  There were Ritz Crackers, Oreo Cookies, Chips Ahoy Cookies, and Nabisco Vanilla Wafers.  The closest we ever got to goodies like these was seeing them advertised on TV!  Although I could tell they were a little stale, my brothers and sister didn’t know the difference.  We ate to our hearts’ content.

While under the bed, the thought came to me that maybe Momma stole these goodies from the Sheltons and one of their bulls was coming to kill us for what Momma did.  My siblings said they didn’t hear it, but I thought for sure I could hear the bull breathing and snorting near the bedroom window.  Good thing we had the dark green shade pulled all the way down so he couldn’t peep in on us.  Before too long, all of us could hear squeaky wagon wheels coming up that same path.  That had to be Mr. Percy with his mule and wagon. He lived way back up in the woods, close to the Shelton’s cow pasture.  Maybe he could rescue us – we could all fit in his wagon.  I convinced Sam Jr. to come from under the bed (because I certainly wasn’t coming out), go to the window, raise the shade, raise the window just a little bit, and call Mr. Percy.

He peeped first to make sure the bull was not there. Then he whispered in a scared, timid voice, “Mr. Percy, Mr. Percy!”  He wasn’t loud enough and Mr. Percy just kept on creaking up the path.  Now, what would we do?  Things had gotten quiet, so I decided I was going to crawl from under the bed to join Sam Jr., but one of my plaits got caught up in the bedsprings and I was stuck, in pain.  I almost started crying but Sam Jr. thought about running to get the scissors to cut me loose.  What a relief it was to get from under that bed and finally breathe!  Facing the dresser mirror, with horror I saw the gaping hole in my hair. I needed to get my plait back and plug it into the hole with some hairpins.  I reached back under the bed to retrieve my plait but it was stuck too tightly in the bedsprings. Wow, Momma will really be mad!  While under there, I noticed that my sister and two other brothers had fallen asleep.

Since nothing could be done about the hair, I tiptoed lightly, stepping on Todd’s Oreos, to the back door with Sam Jr. close behind. We peeped out to see where the bull might be.  Lo and behold!  He was in the path near the fish pond heading back to the pasture, the two cows following him, their tails switching back and forth.  We saw Momma coming down the hill heading home.  Boy, were we happy!  Sam Jr. and I ran to meet her, both of us trying to talk at the same time about what happened. She was amused but understood why we were so scared.  And, she didn’t yell at me about the missing plait.  I asked her if the bull had come to get us because she stole the goodies.  Surprised by that question, she immediately replied that she did not steal them: Mrs. Shelton had told her to clear the food pantry of all of the old bags and boxes that had been opened to keep ants from coming around.  She figured that some items were still edible and instead of throwing them away, gave them to us.  I was really glad to hear that, since Momma always taught us not to steal.

When we got in the house, the smell of Todd’s diaper met us at the door.  I think that too much of those ‘rich’ snacks upset his stomach.  The three of them were still asleep. I opened the other doors and windows to let fresh air in.   Momma woke the others and got Todd cleaned up and diaper changed.

It was a week later that we found out how the cows and bull got out.  Mr. and Mrs. Shelton were trying to keep their voices low, but Momma heard every word. They had three sons, ages 13, 15, and 17.  Well, it was their middle son, 15-year-old Pete, who was the culprit.   Apparently, he wanted to go on vacation for a week with his best friend’s family but his dad told him that was too long to be gone; that his brothers would not be able to take care of their chores and his chore of taking care of the eight cows and two bulls.  So Pete knew just what to do.  He secretly took the wire cutters and cut a big hole in the fence to let them out.  That way, they could be out and about and be lost for a week while he was on vacation. Things could have been a lot worse for him if all 10 animals had gotten out. Needless to say, Pete did not get to go on vacation.   Clearly, he had a beef (all pun intended) with his dad.  I was only 10 years old, but even I could see what a dumb idea that was!

My siblings and I talked about this incident almost every day for a long time. We could even laugh about it, when at the time, it was no laughing matter.  For a while, I was able to threaten my siblings into obedience by telling them that I was going to tell Pete to let the bull out again.  It was a short-lived threat, as they soon found out that I could do no such thing!

One thought on “Boomer Memories: Who Let the Cows Out – Especially the Bull?”