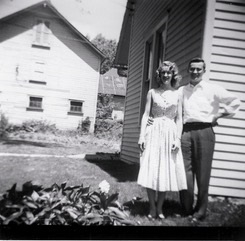 Saying Goodbye to Mom: Our Journey and the Lessons We Learned

As an insurance professional, my business is helping people prepare for life’s difficult passages. To many people “long term care” is a scary word, and they do not want to talk about it.  They know it could become necessary but they don’t like to think they might need it.   Life can take a turn in the blink of an eye, as I recently learned from difficult personal experience.  I am now driven more than ever to help people plan and be prepared for all the “unknowns” of their health and financial future.

Here is my family’s story:

April 2017, my sweet 80-year old mother, Carolyne Sue, was outside cutting the grass and using the weed eater, maintaining her gorgeous vegetable and flower garden as she had done for years. People walking by would always see this cute tiny lady working away in her yard on the corner of Francistown Road and Francis Marion Court. It looked as if it were professionally landscaped.

While she tended the yard, my 85-year old Dad worked at Martins, formerly Ukrop’s at West Park Shopping center near Richmond, VA.  He had been there for 17 years and was their oldest employee.  Everybody loved my father.  He was “old school.” He went to work, did what they asked him to do, and did not get involved in drama or politics.  Bless his heart, he worked there up until the store closed for good in July 2017.

That was April, and all was well. And then in May, my world came tumbling down. My mother said she was feeling tired and had shortness of breath and went to her doctors for some tests: blood and bone marrow.  She had been on medication for years that was helping her white blood cell count, but it was no longer working.

My mother called each of her children and told us that leukemia was knocking on her door.  She had MDS syndrome, also known as acute leukemia.  My heart sank; I knew this was not good news. After hanging up the phone, I cried and cried.  I was trying to be strong and have hope, but deep down I was not ready to face reality.

My mother was 80 years old and only weighed 105 pounds. But she was a hardworking tenacious lady up until she became sick.  She was still going to the mall and walking:  Heck, she could out walk anybody at the mall and had the figure of a 20-year old!  But sadly, walking and gardening were not going to help her blood and lungs.

By the second treatment in June my mom was extremely weak and could not eat.  Everything tasted horrible to her.  It broke my heart to see her get so weak and suffer.  By August she decided she did not want any more chemo treatments; it just made everything worse.  That month she ended up in the hospital with an infection; I am surprised she did not go to heaven then.

The doctors were trying to fight the infection and get her strong enough to insert a port to make the blood transfusions easier.  We thought her body needed more time to get used to the treatments.   After three weeks in the hospital and rehab, the port surgery was scheduled. Within a week of the surgery, everything tumbled again.  Dad brought Mom to the house on Saturday because she wanted to be home, but no sooner did she get there, and we had to call emergency.  She was having trouble breathing.  That Saturday afternoon Mom went back into the hospital.

I felt a stab in my heart when I got a call a week and a half later from Hospice of Virginia, telling me that my mother was being released to come home on Thursday, September 21, 2017.  I hung up the phone and burst into tears.  Coming home to be in hospice care was final.  As I went to pick up my sweet dog Ralph from doggie daycare, I was hysterical.  I could barely speak as I explained to the workers there that my dear mother was entering hospice care.

Next, I had to face the difficult task of contacting all of my brothers and sisters with the grave news.  I was in denial all summer long; however, I knew that we were all facing the inevitable.  Deep down in my heart, I knew it was my mother’s time to come home to be with the Lord.

The week Mom came home for hospice care, it sent a shock wave through my family.  There is no how-to guide for handling such a difficult and unforeseen situation. We were told a caseworker from hospice would be coming to visit the afternoon my mother was to come home from the hospital.  The caseworker arrived with all kinds of supplies. Prescriptions for morphine and Atavan were ordered from the pharmacy.  She thoroughly explained the procedures that would be required to make my mother the most comfortable and how to administer the medications.  The hospice company was going to be our “911” for everything going forward.

My Dad and my 5 brothers and sisters were really in shock.  This was it!  My mother had come home to die.  A nurse would be sent every other day from hospice.  We could also contact the social worker, the pastor, or the nurse on duty at any time.  However, we were not trained caregivers.  My mother needed 24-hour support, so we really needed to hire private nursing aides to assist us. Thankfully, hospice was able to provide us a list of resources.  Cost was not a factor. We wanted the best for my mom.  We hired two awesome caregivers—sisters actually–who rotated their time over the next nine days.

The first four days were really tough.  Mom was conscious, but she was fading fast because she was no longer getting fluids or blood from the hospital. My brothers helped Mom for the first two days until we hired the private care, and it was exhausting and stressful for the family. Never in a million years did they think they would have to help our mother with everything, including using the bathroom. It was extremely difficult.

Four days into hospice, my mother was no longer waking up or eating. She drifted into a peaceful sleep.  Every single day was so emotional for our family.   Waiting for a loved one to die is really torture. At one point, I heard my mom cry out, “let me go.”  I swear Jesus was calling her then.  For the next four days, we all took shifts at the hospital. We nurtured her, talked to her and kissed her.  I even played Bing Crosby Christmas songs and my Dad danced her little toes as the music played. What a beautiful site.

I never knew when I would get the dreaded phone call, but then it happened.  It was about 1:00 am on Saturday, September 30, 2017.  My sister Becky called to tell me that Mom had passed.  I called my brothers and my other sister, Julie.  We also called the Chaplain on duty; we needed guidance on how to tell my Dad.  He had been married to his beautiful wife for 62 years.  And to make things even more difficult, my Dad was also showing signs of Alzheimer’s.  Telling my father that Mom had died was one of the most difficult things we’ve ever had to do.  He broke down in tears as we hugged him and kissed him then came downstairs to kiss Mom goodbye.  The next hardest thing was when the coroner came to take Mom to the funeral home.

Mom and Dad had planned very well.  They had all of their legal documents in place, and we knew their wishes.  One of the best things my parents did was buy Long Term Care Insurance.  Medicare does not cover the private duty certified nursing assistants and it does not pay for long term care. If your loved one has to go into a care facility, you will have to pay out of pocket until financial assets are spent down in order to qualify for Medicaid, and then you will not have much choice as to the caliber of care. I cannot stress enough how important it is to plan for that.  And you cannot qualify for Long Term Care insurance if you cannot perform daily living activities or if you have cognitive impairment.  The time to get it is in your 40s or 50s; when you are healthy.

There are so many more options in long term care solutions than ever; for example, hybrid policies that pay a death benefit, if you do not end up needing the coverage. I am a financial planning professional and have seen how devastating it can be to families who do not have adequate coverage; dealing not only with the stress and grief of illness, but the financial trauma as well.

Our experience was so difficult and we miss my mother so much, but are grateful that paying for her care was one thing we did not have to worry about. Contact me if I can be of any help as you plan for your future.

I have lived in Richmond, VA all my life, and I love it. I am the 5th of 6 kids. It was not easy, but I grew up with loving and caring, nurturing parents. We were taught to behave, to work hard, and appreciate what we had. I attended J. R. Tucker High School, where I graduated with honors, then attended VCU and graduated with a Business Administration degree. I then went back to VCU to get my teaching degree, but after student teaching, I decided it was not for me. Selling and helping people was in my blood. I have been in sales for 26 years: first with Circuit City then Cobb Office Products. I also worked with banking, fundraising, and educational companies. After being laid off three times, I decided to work for myself. I obtained my real estate license in 2006, and I worked for Vector Security at the same time. My real calling was when I obtained my life, health, and annuity license in 2015. I have not looked back. I am driven and passionate to help people more than ever.

One thought on “Saying Goodbye to Mom: Our Journey and the Lessons We Learned”