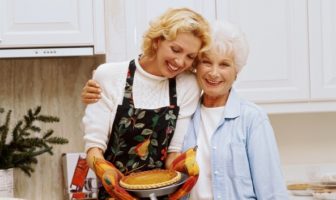 Discovering the Joy of Cooking!

My new-found love is cooking. My role models, my Mom and Grandma, were both tough acts to follow when it came to cooking. They were Pennsylvania Dutch farm wives who could produce impressive 4 and 5 course meals—all while taking care of the kids and grand kids, managing a farm and running a farm market and bakery. The Pennsylvania Dutch know how to cook, and how to eat. Even though things were tough, they would do everything they could to make sure we were well fed.

My mom would can and freeze fresh fruits and veggies from our farm throughout the summer in anticipation of the lean winter ahead. She would commission half a steer at the local butcher and then help to process it in order to save money. (The butcher and his wife were high school buddies, so I’m sure all the work of processing the steer was mixed with lots of joking and gossip.) But she did this so she got first dibs on all the good stuff that might otherwise go to waste—like soup bones, which she turned into the most amazing soup you can imagine.

For most of my young life cooking seemed like nothing more than a chore… something you had to do to assuage hunger. When I was initially out on my own, this process was pathetically streamlined. Dinner consisted of Spagettios and mac ‘n cheese—and burgers and pizza when we could afford to eat out—the usual college fare. Then when I had my own apartment, I got a Crock Pot and got a little more adventurous. But who had time? My focus was my career. Food was an afterthought.

When I got married, my husband and I felt we had to up the game a bit, host dinners, try to eat well, and make nice meals for each other. Yet I found it all very frustrating. I didn’t seem to have a natural talent for cooking…and I always compared myself to my mom, grandmother…and now my mother-in-law, who as a young wife learned to cook the most amazing Italian food from her own mother-in-law, a first generation Italian immigrant. How could I ever compete?

The feeling about cooking did not improve as the years went by. I wondered how anyone managed it. There was the recipe identification—the time consuming process of actually poring over hundreds of recipes in order to first just figure out what to cook—then making and shopping list and going out to forage, then cleaning and preparing everything. Only then did the cooking actually commence. And God forbid, if there were multiple courses, trying to execute and time the arrival of dishes just totally stressed me out.

Over the years, things changed. Martha Stewart made “home keeping,” including cooking, seem cool and fun. I started to understand what a pleasure it could be to make really good food. Cooking became more of a challenge followed by a sense of accomplishment than simple drudgery and stress. And as with other pursuits, cooking became easier with every attempt. I stayed at home for a while when my daughter was small and my “nesting” included making really nice meals that were good for us. The great meals made it enjoyable to sit around the table and bond as a family.

I also started to become more adventurous with spices and other ingredients. I had discovered and become addicted to Thai food when my husband and I first were married and stationed overseas. When I came home there were no Thai restaurants in our town, so I had to learn to make it myself, procuring the exotic ingredients in the Asian markets of Philadelphia during trips to visit the in-laws.

What really turned the tide for me was a cooking school called “The Kitchen Shoppe” located in Carlisle, PA just 45 minutes from our home in Hershey. Oh my, what fun we had there. That’s when I started to really love cooking. This school didn’t waste any time with the “hands-on” nonsense where actual work and messy hands were involved. Instead the students, including my good friends, sat classroom style and sipped wine as the instructor and sous chefs prepared the meal in front of us, course by course, and served it up along with all sorts of great cooking hints and tips as they went along. We learned to cook in an atmosphere of total sensory pleasure. That was my kind of class.

Now I consider cooking a most enjoyable pastime…one of life’s most favorite things. I may actually officially be a “foodie” since I avidly follow all the restaurant openings in our area and troll the local farmers markets for new tastes. Cooking has become intriguing. It’s a creative challenge to seek out new recipes and create my own, to discuss various finds with fellow foodies, and of course to enjoy the end results.

Richmond has evolved into an amazing foodie city, which delights me no end. One of my favorite haunts is the Penzey’s spice store in Carytown. As soon as you step inside, all the fantastic smells that greet you—pure joy! I surely think a city has “arrived” when a Penzey’s locates in town. Wegman’s is next. We are truly blessed.

Boomers, what fascinating, life enhancing (even life changing) pursuits have you discovered in the second half of your life?