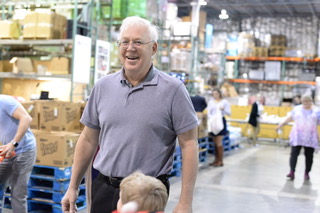 He doesn’t even know he’s a hero, in fact, he insists he is not. But we feel differently. All of the Boomers we have met with our Second Act series, ordinary people, have turned out to be extraordinary. Here is Mark Baird’s story:

Mark is a business owner, an accountant who opened his own accounting firm in 2003. But it is the scores of foster children he has helped raise, that he considers his true life’s work. And now he is raising the son of a foster child who proved unable to care for him and gave up custody. He finds himself at 60+ a single grandparent, still running his own company, raising a young child and serving as a role model to the next generation. Oh, and if that’s not enough, Mark is planning to serve as a living organ donor, donating a kidney to someone he formerly did not even know, in order to save a life.

And that is what makes Mark a cool person.

I met Mark through Synapse, a business networking organization in Virginia that supports community non-profits while simultaneously supporting business owners. 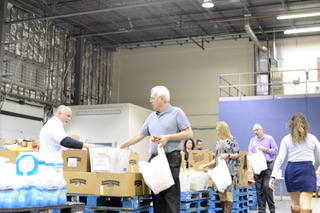 When we sat down to talk recently, the conversation revolved around his grandson, and that conversation spoke volumes. I asked if he finds the responsibility overwhelming at his age, after long ago raising his own two children, as well as many foster children. “No,” Mark replies, “he is not a burden, he is the joy of my life. See my big smile when I talk about him.” Yes, I certainly did see a big smile.

Mark struggled himself as a child. He had an abusive father and vowed when he grew up and could determine his own course, he would help children. He had deep empathy that grew out of wanting to help others who were suffering and struggling.

He tells me about his fear, early in life, that the cycle of abuse would continue, as it so often does in families, generation to generation. Interestingly, what changed his course was a paper he wrote for a college sociology class. Having to do the research and write about this issue really made him understand that what he went through was wrong. It made him take stock. He vowed to live a life helping others, which he did, over and over again. He estimates that he and his family cared for 50-100 foster children over the years; the number is so variable because some of the children were in their care for only a few days. 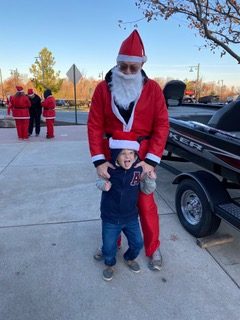 He remembers that so many of the kids came from heartbreakingly difficult situations. “But if you gave these kids just an ounce of benefit, of love and care, it made such an impact,” he said. He still maintains contact with a number of the children, whom he now sees grown and thriving.

Mark has worked as an Accountant since 1987 and then opened his own accounting firm in 2003. He specializes in helping small businesses and non-profits. His company recently merged with an insurance company, RBI Services LLC, who serves the same market and whose owner Jimmy Comer, also shares Mark’s commitment to serving the community.

Later in life, Mark was divorced and then in his 40s met his second wife, who he calls the love of his life. When he lost her to cancer in 2017 after 8 years of marriage, he was devastated. “It took me 2 years to come out of the hole I was in,” he says. He credits his involvement in Synapse and other organizations for getting back into life. “If you stay in the rut, there is a good chance you yourself won’t survive,” he advises. We discussed how often with elderly couples, when one passes away the other soon follows. “I don’t fear death but there are too many things I want to do with the life I have left.” 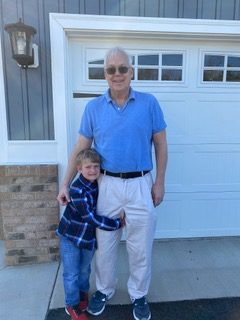 Among the positive steps he took to recover his life was getting involved in the community and his church. Included in these steps was joining Synapse and a great story started here. One of the non-profits Synapse supports is UNOS (United for Organ Sharing), which is based in Richmond. Mark attended a Synapse meeting there and was touched by the amazing life-saving work UNOS does every day. He mentioned he was interested in becoming a living donor.  Another active Synapse member, Brain Berry, himself a recipient of a life-saving organ donation, heard this. Brian knew of a man in the Synapse family whose health was failing as he awaited a kidney donation. He put the two in touch, and now the process to save a life has been put into motion.

I asked if Mark had any concerns about his own health as he prepares for the donation. He explained that recovery is easier nowadays because of recent medical advances—a few weeks instead of a few months. “I don’t need that other kidney, I only need one,” he smiles. “It is what I want to do, I want to help people.” Wow, I hardly knew what to say, it is hard to argue with that sentiment. At the time we spoke, the intended recipient ended up having to have another different surgery, so timing depends on his recovery. The accountant in Mark noted that he hoped the surgery wouldn’t be scheduled until after tax season!

When I asked about regrets or lessons learned in his life, he only mentions one, and that is the anger he held towards his dad, who has since passed away. “I should have given it up earlier,” he said. “The best way to put yourself at peace is to forgive. It’s not for the benefit of the abuser, but for yourself. Two wrongs don’t make a right.”

The conversation turns back to his grandson, who calls him “Poppa.” He is already teaching his grandson about giving back and the joy of helping others. They help out at another of one the organizations involved with Synapse, Cobb Technologies, whose non-profit arm Cobb Imprint, helps at-risk and impoverished children in the community. He and his grandson often pack backpacks and food for these children. “I already see empathy developing in him,” he says.

When I told Mark he is a role model, an example of how one person can make a difference to so many lives, his reply was humble and simple: “My nature is if people need something and I can help, I will. You are only in this world a short time, taking care of others is a way of life. I just do what I can.”

In a world that seems full of chaos right now, people like Mark go quietly about living their lives and changing that world for the better. It makes you realize how much good is going on, how many heroes are right here, hidden in plain sight.