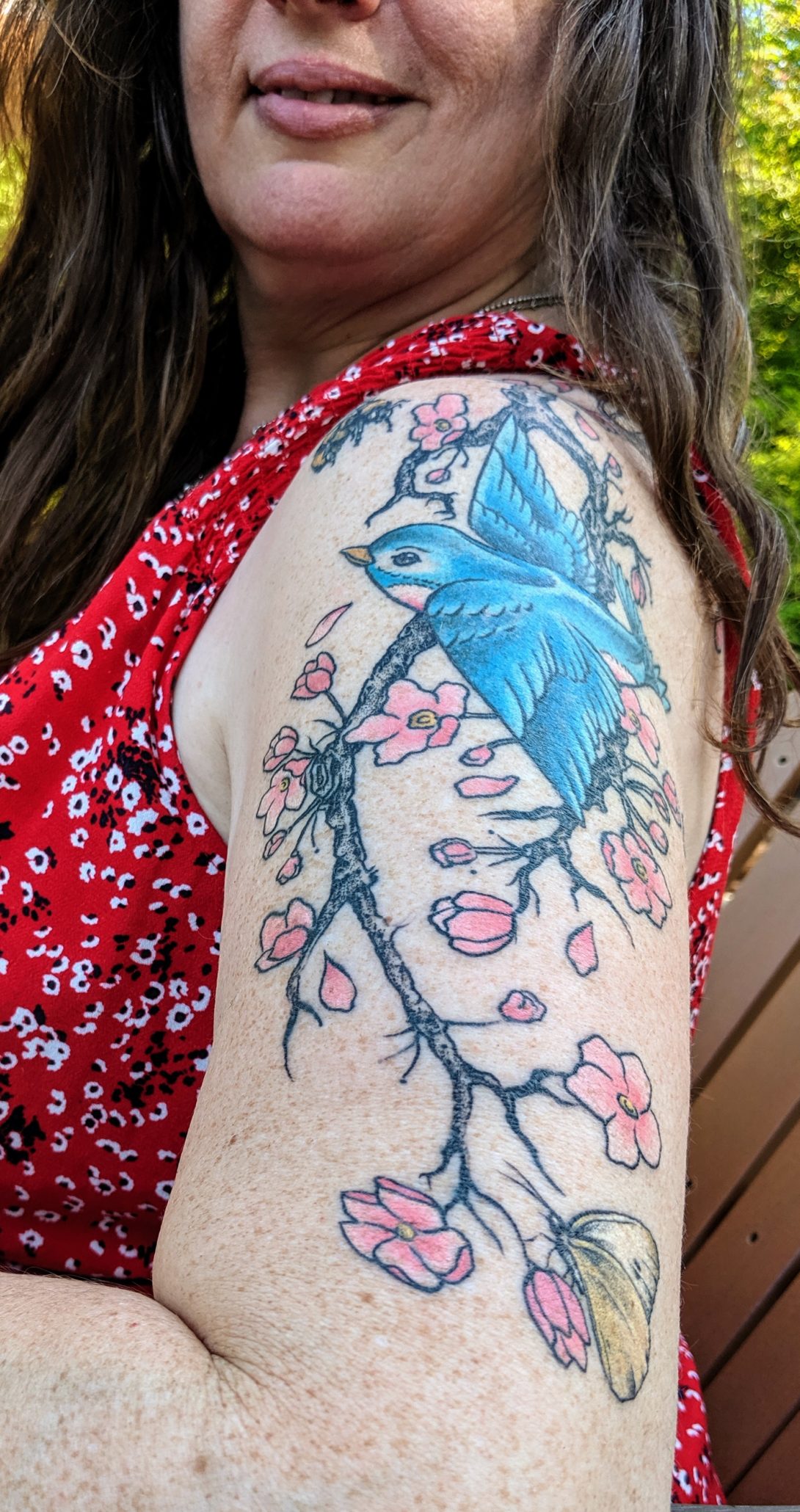 Tattoo or Not To Part 2: A Voice in Favor

Tattoo or Not To? It’s such a matter of personal opinion. And personally, it is not a direction I wish to go in, as I confessed in an earlier blog, Tattoo or Not to? However, my dear friend Loralee is firmly in the other camp.

Loralee and I share, or at least appreciate, similar sensibilities of fashion, beauty, art and design. A few years ago, when she decided to get a tattoo I was, frankly, shocked. I just have never been a fan, even though my part of the world–Richmond, VA–lays claim to being one of the most tattooed cities in the country. https://www.totalbeauty.com/content/gallery/most-tattoos/p63262/page9

Loralee now sports two very significant tattoos, one on each arm. Our completely opposing viewpoints make for an interesting discussion.

Where Did It Begin?

Loralee recounts that about 7 years ago her husband was in Vegas with the guys and came home with a tattoo. “I was jealous. I decided I wanted one too!” she says. “I love the idea of tattoos; I love the artistry.” And so, off they went on an adventure/joint venture to NYC and made appointments to get tattoos. She came home with this one on her right arm. 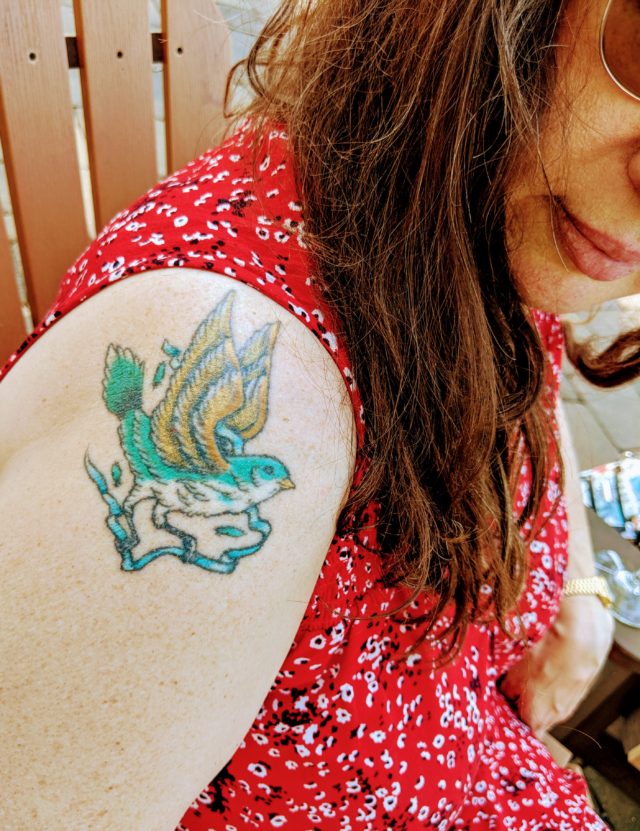 Here’s the thing though: While Loralee was thrilled with her tattoo, her Mom did not approve. Her Mom was very conservative, and of a time and place that made her believe that only “trampy” women sported tattoos. “And I am SO not trampy!” says Loralee. This hurt, because Loralee, an only child, was always incredibly close to and respectful of her Mom. “I was 50 years old and my mother made me feel like I was 18,” says Loralee. “She was very disapproving.” But she also agreed the choice was Loralee’s and mostly kept her opinions to herself.

Loralee soon decided she wanted a second tattoo, on her other arm, and began planning the design. During this time, her mother developed cancer. As the illness progressed and Loralee struggled with caregiving and a heavy heart, she made up her mind she did not want to upset her mother in any way, but she also promised herself that at some point, she would get the tattoo she really wanted. “In the dark moments, I knew the loss would be so great and I needed some things to look forward to. Planning the beautiful tattoo that was forming in my mind was a bright spot amid all the grief.”

Sadly, Loralee’s mom lost her battle with cancer early this year. Often the grief was so overwhelming she had a hard time getting through the days, let alone planning the carry through on what was a big decision. A tattoo is a commitment.

In Spring, when she was ready, a friend of hers offered to introduce her to her son-in-law, a highly regarded tattoo artist named Matthew Macri. He practices his craft at Lady Moon Tattoo in Pittsburgh, about a 3-hour drive from Loralee’s home.

Her only real regret about the first tattoo was that it was too small. So, when she planned the second one, she intended for it to be larger and very detailed. 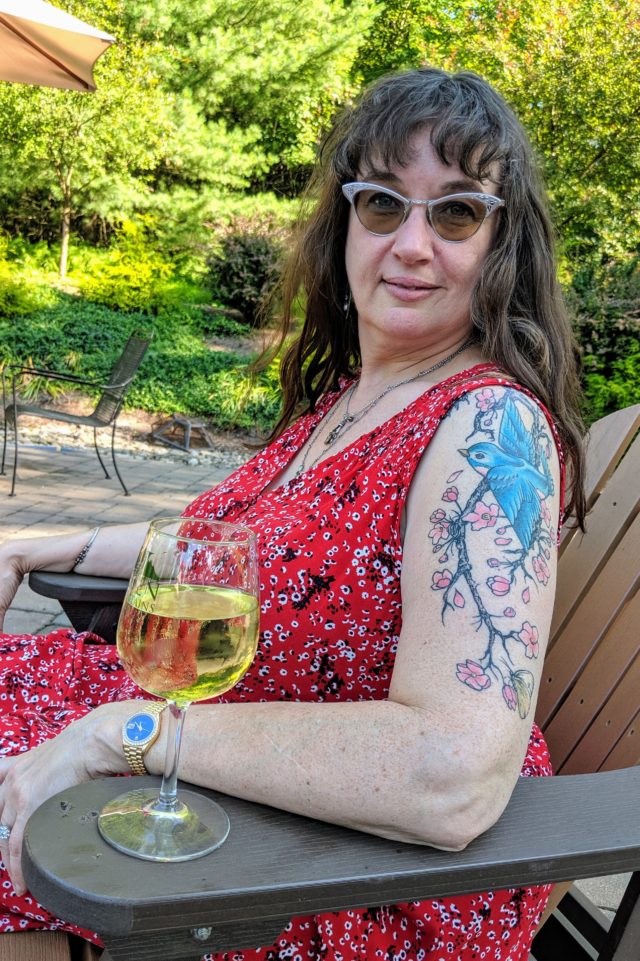 Loralee makes no bones about the fact that tattooing is a long and fairly painful process. “16 hours in that chair is not for wimps.” The process required three trips to the studio in Pittsburgh.

The first step involved 8-9 hours. She worked with Matthew to explain her vision and he spent about 3 hours developing the design. Then he drew it on transfer paper, which in turn was transferred to her skin. Loralee notes that a good tattoo artist takes into account bone structure and musculature, in order that the tattoo fits the body. During this first visit, Matthew applied just the outline of the design, which took about 5-6 hours, adjusting as he went along, to Loralee’s specifications.

After 6 weeks allowing this work to heal, it was time to add the color—another 5-6 hours in the chair. After the next weeks of healing, the final visit included finished the coloring, and Matthew added a few more flowers and a butterfly Loralee had decided upon. He also touched up the design and brightened up the original tattoo on her other arm. All told, the tattooing process required about 16 hours plus the time it took to draw it, so 20 hours total, at a cost of approximately $1,000.

Asked if she has any regrets about her choice, Loralee’s reply is: “None. Absolutely not. I am so happy with it.” She loves the conversations that tattoos spark, especially among young people. Even though tattoos are so common these days, they get attention, occasionally negative (usually from older people.) But they are a point of contact for social interaction that otherwise might never happen. Loralee is a maverick among her coterie of suburban ladies, but they all are both supportive and curious, and, she notes, maybe even a little jealous. They aren’t quite ready to go there, however!

I asked Loralee how her husband likes her tattoos and she laughed that while his various tattoos–a dragon and a skeleton clown–give off an edgy vibe, hers are completely “girly.” Her husband’s nickname for her is “Fluffy Bunny.” While for many, tattoos have deep personal or spiritual meaning, Loralee noted that hers were chosen for the beauty of the art. Loralee has a friend who jokes that she always seems to have bluebirds flying around her head and a smile on her face, hence the bluebirds. What I love is that she added a bee in honor of me, as my husband’s nickname for me is “the Bee” – a play on my initials CB.

I asked if she would consider more tattoos. “I’m totally open to it. I might get more work on the original arm to balance the size of the new one.”

I asked Loralee how the tattoos make her feel. Since this is something I don’t relate to, I wanted to know the big why. Does a tattoo change your self-perception?  “Yes,” she said, “it does make me feel more attractive. A tattoo says something about the person you are. I feel it makes me more interesting.” She uses words like youthful, independent, badass, free. Well, I like those words! I am starting to get it.

Loralee makes an interesting point, and since I have known her since we met in college–studying art in Rome during our junior year abroad–it completely resonated with me: At 50+, she and I now live a very comfortable suburban life, but our hearts still lie in that world of youth, art and individualism. We miss it, as we all miss our youthful selves. Her indie, arty side is often hidden from the world, especially living in a conservative Central Pennsylvania college town, and this tattoo is a way of letting it out to play again. “That non-conformist that defined who I am still lives inside me.” She notes that she considered getting something far more edgy but wanted something she would still love and be comfortable with “when I’m 90.”

“And I absolutely do love it, I look at it all the time. It is so me…bluebirds, flowers, butterflies…and bees.”

One thought on “Tattoo or Not To Part 2: A Voice in Favor”