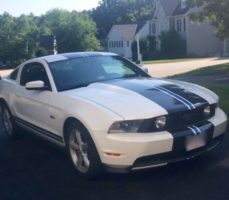 Take a look at this photo: Isn’t she a beauty? My husband and I both turned 51 the year we bought the Mustang. Yes, it was a mid-life crisis purchase, and one I would highly recommend to anyone.

My husband and I have been married for 28 years and he is VERY fiscally conservative, so I had long ago given up on the idea of having a sports car. Owning a sports car doesn’t make any kind of rational sense: it uses too much gas, costs too much money isn’t practical for a family, loses value as soon as you drive it off the lot, will get door dings, and worst of all, you will be perpetually worried that something will happen to your “precious”…or be angry for months because it did.

Yeah, yeah, yeah. I know. As much as I love beautiful cars, owning one was not in the stars for me, and it simply fell off the radar. I never even had the pleasure of driving such a car and very rarely even drove in one. My family and friends are mostly conservative too!

My first cars were a series of cast offs from various family members. They let me use their clunkers while I was in college, working over the summer, and when I needed wheels after landing my first job but could barely pay the rent.

When I got married and joined my husband on the island of Guam, where he was serving in the Air Force, he had brought with him an old Jeep that he had fixed up while he was in training in California. He loved that car. It was a vestige of the carefree bachelor life he had left behind. I hated it and it hated me. It was horrible to drive, open to the elements—namely the blazing tropical sun. To say it had a rough ride was an understatement. It was awesome for taking into the Guamanian jungle or 4-wheeling on the beach, but not so good for day-to-day stuff, like getting groceries or going out on date night or to the Officers Club. It constantly sputtered and stalled, I never really got the knack of driving a stick shift. It was the cause of our first major arguments. His buddies (and their wives) finally convinced him it might be wise to get a “normal” car, which came in the form of a frail little repossesed Nissan Sentra. But it had AC, and we had very little money, so I was satisfied.

Then there was a series of cars that were purchased because they were serviceable and the dealership was anxious to get them off the lot, and not for any other reason. There was Geo Storm, which was cute and bright yellow but possessed an unimpressive engine that had a hard time climbing the mountains of Pennsylvania where we lived. Then an attractive red Blazer, purchased after a particularly brutal Pennsylvania winter. Then when our daughter was born, of course, the minivans. So that is my life in cars.

But now…I’m boring no more! Now I know what I was missing all those years and there is no going back. There is nothing like driving a fast car, the thrill is just so huge. I love that Mustang. I love the curves, the massive front body required to hold such a big engine, the bright round headlights. I love the sound of tha 5.0 liter V-8 engine, the way it purrs then roars. The best thing is the sheer power, I can’t even believe how fast it accelerates. I can see how it would be dangerous in the wrong hands.

Of course that baby is in the right hands with me, and it’s a fight sometime to pry it out of my husband’s clutches.

My daughter insists we come pick her up at school in the Mustang…the other car is our uncool Toyota minivan. I can’t deny that I get a kick out of the way the teenage boys stare appreciatively when we pull up, not just at my daughter, but at the car as well. It is sweeeet, the whole thing. I love it all.

Some things in life you just have to wait for, and then you appreciate them all the more.