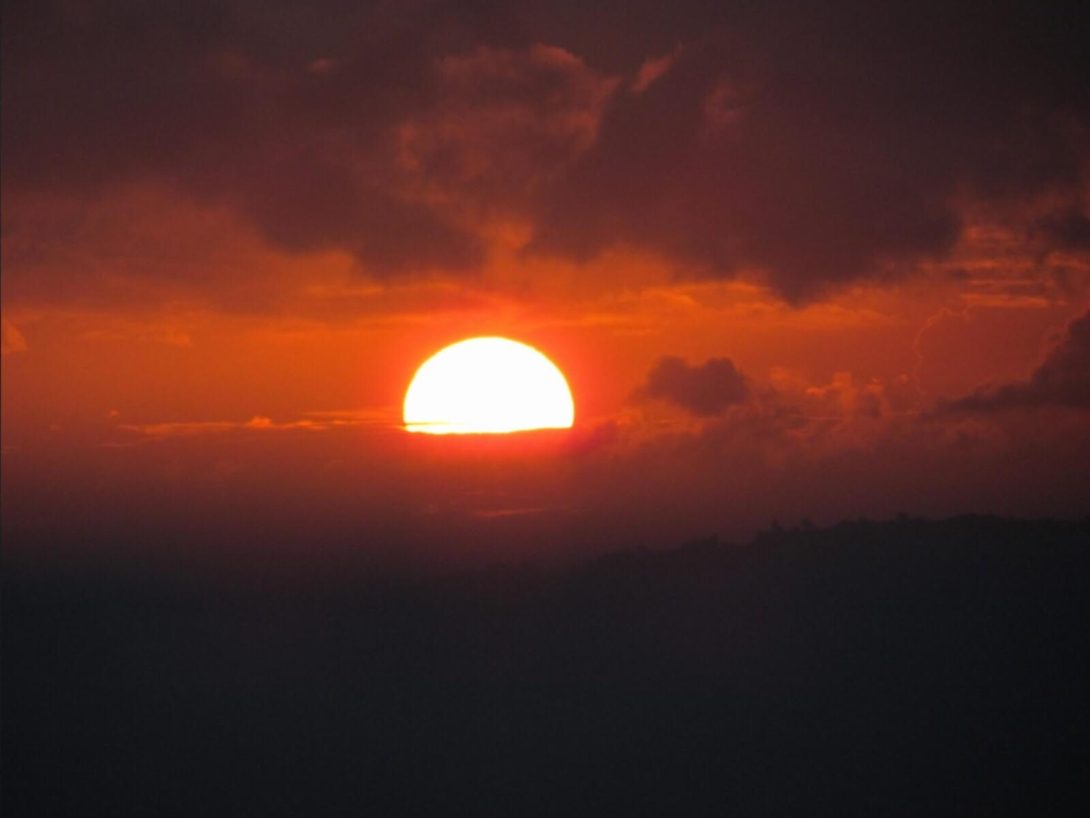 The story of the creation of the Story of Creation

On a bright, glorious morning, the most learned and literate man in all the village rose early and walked into the wilderness to pray and meditate about the wonders of the world that he and his people were blessed with, and to ponder the mystery of the origins of these blessings.

After a short time of meditation, the man – whom we will call “John” – was startled by a voice.

When last we left John and God, they had agreed to meet the next morning so that God could dictate an important story to John.

The next morning, John rose early, well before the sunrise, and moved quietly about his family’s hut, getting dressed, grabbing some fruit for breakfast, and putting on his sandals. Despite his efforts at stealth, John’s movements woke his wife.

John walked along the path leading from his village, chewing on some beans and carrying a number of soft clay tablets and several stiff reeds to make impressions in the clay with. After some time, he approached the spot of the prior day’s meeting and began looking around for signs of God. None were apparent.

“John.”
“AAAAHHHHH!!!!” John jumped, badly startled again. “Don’t DO that God!”
“Sorry, sorry, but I’m not sure how I can avoid startling you,” God said. “You could probably do with less caffeine in the morning anyway.”
“What’s caffeine?”
“Nevermind,” God said. “Are you ready to write?”
“Yes,” John said as he carefully put down all but one tablet and one reed. He then settled cross-legged in a dry, firm spot of dirt and prepared to write.
God began. “I am going to tell you the story of how I created the world.”
“Oh boy!” John exclaimed eagerly.
“OK, here we go,” God said. “In the beginning, I created a Universe that was uniformly comprised of matter and marked by very high energy density, incredibly high temperatures and massive pressures. This Universe was rapidly expanding and cooling. Within milliseconds, there was an astronomical (hee hee) cosmic inflation and the Universe grew exponentially. This resulted in a prevalence of quark–gluon plasma, and all other elementary particles, and there was continuous creation and destruction of particle–antiparticle pairs due to collisions.
“Now – this part is important – after just the right amount of time, a reaction called baryogenesis violated the conservation of baryon number, which naturally led a very small excess of quarks and leptons over antiquarks and antileptons. Of course, this resulted in the predominance of matter over antimatter in the present Universe. Good thing, that! Am I right?
“Anywho, the Universe naturally continued to grow in size and fall in temperature, therefore, the typical energy of each particle was decreasing. Within a few more milliseconds, quarks and gluons combined to form baryons such as protons and neutrons.
“The temperature was now no longer high enough to create new proton–antiproton pairs or neutrons–antineutrons, so it goes without saying that a mass annihilation of these pairs immediately followed, and then a similar mass annihilation of electrons and positrons.
“After a few minutes, neutrons combined with protons to form the Universe’s deuterium and helium nuclei. BUT, most protons remained uncombined as hydrogen nuclei – this becomes important later, you’ll see.
“The Universe continued to cool, and the mass energy density of matter came to dominate that of the photon radiation, from a gravitational standpoint.
“Following that, I allowed about 379,000 years to go by, during which time the electrons and nuclei combined into atoms – mostly hydrogen, as you would expect.
“Over a long period of time, the slightly denser regions of the nearly uniformly distributed matter gravitationally attracted nearby matter and thus grew even denser, forming gas clouds, stars, galaxies, and the other astronomical structures observable today.*
Among these were the Earth and what you see in the Heavens.”
God looked up at John, who wasn’t writing.
“Did you get that?” God asked.
“Well, after ‘In the beginning I created…,’ I kind of lost you,” John replied.

Chapter 3 – The Conclusion of the Beginning

“’In the beginning God created…’?” God asked. “That’s it?”
“Yes,” peeped John, embarrassed.
“What about the quark-gluon plasma and the rapid expansion of the Universe and all that?” God asked.
“Um, no, I didn’t get that,” John admitted. “Honestly, I don’t know what any of those words are.
“You know what would help?” John offered. “Tell me how long all this took.”
“Just the part I explained took hundreds of thousands of years, and I didn’t even get to the part where I create you and the animals!” God said.
“How many days does that make?” John asked.
“Hundreds of millions of days, even billions of days!” God exclaimed.
John sat silently, processing what God said, then held up both hands, fingers outstretched.
“More days than this?” John asked.
“Yes!” God said. “Way more!”
“More than this too?” John pressed, sticking out his legs and stretching his toes.
Now God was silent.
“Maybe I’m not the right guy for this job,” John said quietly, looking down.
“No, no, it’s not you,” God reassured him. “You’re the right guy for the job.”
John looked up a little.
“I’m just not telling the story very well,” God continued.
“Want to try again?” John asked, eager to help.
“Yes,” God said. “Let’s try this again.”

Then God told John about how in the beginning He created the heavens, in which all of creation would sit, and how all the stuff in those heavens at first were without form or shape. God told John how His spirit moved across the heavens and with that there was light, and that the light was balanced by darkness.

“How many days did all that take?” John interrupted.
“I’m going to say ‘one,’” God said.
“OK, that was the first day. Got it.”
Then God continued, and told of the creation of Heaven on the second day.
“It took all day to make Heaven??” John exclaimed.
“Well, Heaven’s a pretty special place,” God explained.
“Hmmm. Must be.”
God then described the swirling clouds in the heavens gathering together to create a great expanse of water, and then how dry land emerged on the water, and God called these Earth and the Seas.
“This was good,” God said.
“Yeah,” John agreed. “Otherwise we’d all be walking on water, and that’s impossible!”
“Yes,” God said. “That would be something.”
God also told John of all the trees and grasses and plants He put on the dry land, and all the animals He put in the sea and on the land and in the air, and how He made it possible for the plants and animals to multiply themselves without Him having to do it directly.
“That was a good idea,” John said.
“Thank you,” God responded.
God also talked about putting the stars and moon in the sky to give light at night, and the sun to give light during the day, and how all these changed with the seasons, but always came back around again.
“And I saved the best for last,” God said.
“Women?” John asked.
“Well, yes, women and men,” replied God.
“Oh, good point,” said John. “And all this took six days? That’s a lot of work!”
“Yes, it was, but I’m very happy with it all,” God said. “Still, it was a lot of work, so the seventh day I made as a day of rest. That day is very important, so you can rest your body and your mind.”
John nodded and looked down at his notes.
“Shoot,” John said after a few minutes, “this is simple! Not like you made it out to be at first.”
“Well, the simplest things can be the hardest to understand,” God said. “But you know how I made it so that the animals and plants and you could make more of yourselves without me having to be directly involved?”
“Yeah,” John said.
“Same goes for you understanding this story,” God said. “I made men and women in such a way that you could understand more and more as you go along, and so you’ll understand more about how I created all of this as you go along.”
“If you say so,” John said.
“Thanks for your help, John,” God said. “Take those back and get the word out. Oh, and don’t forget to pick up some berries and twigs on the way home. Your parents are coming for dinner.”

*Author’s Note: Not having direct access to God for this explanation, I adapted this from Wikipedia.

This column originally appeared on my blog, chuckhansen.com, but since I wanted someone other than my mom to see it, it is being run here on boomerconnections.com.

Chuck Hansen is an award-winning author and humorist. In addition to his books, Chuck’s writing has appeared in publications in Virginia and across the country. Chuck also speaks frequently, bringing his unique, thoughtful humor to business and community group meetings and conferences. Chuck and his wife Stacy have two adult children (Daniel and Madison) and live in beautiful Midlothian, Virginia. For more information, or to contact Chuck, visit his website atchuckhansen.com.