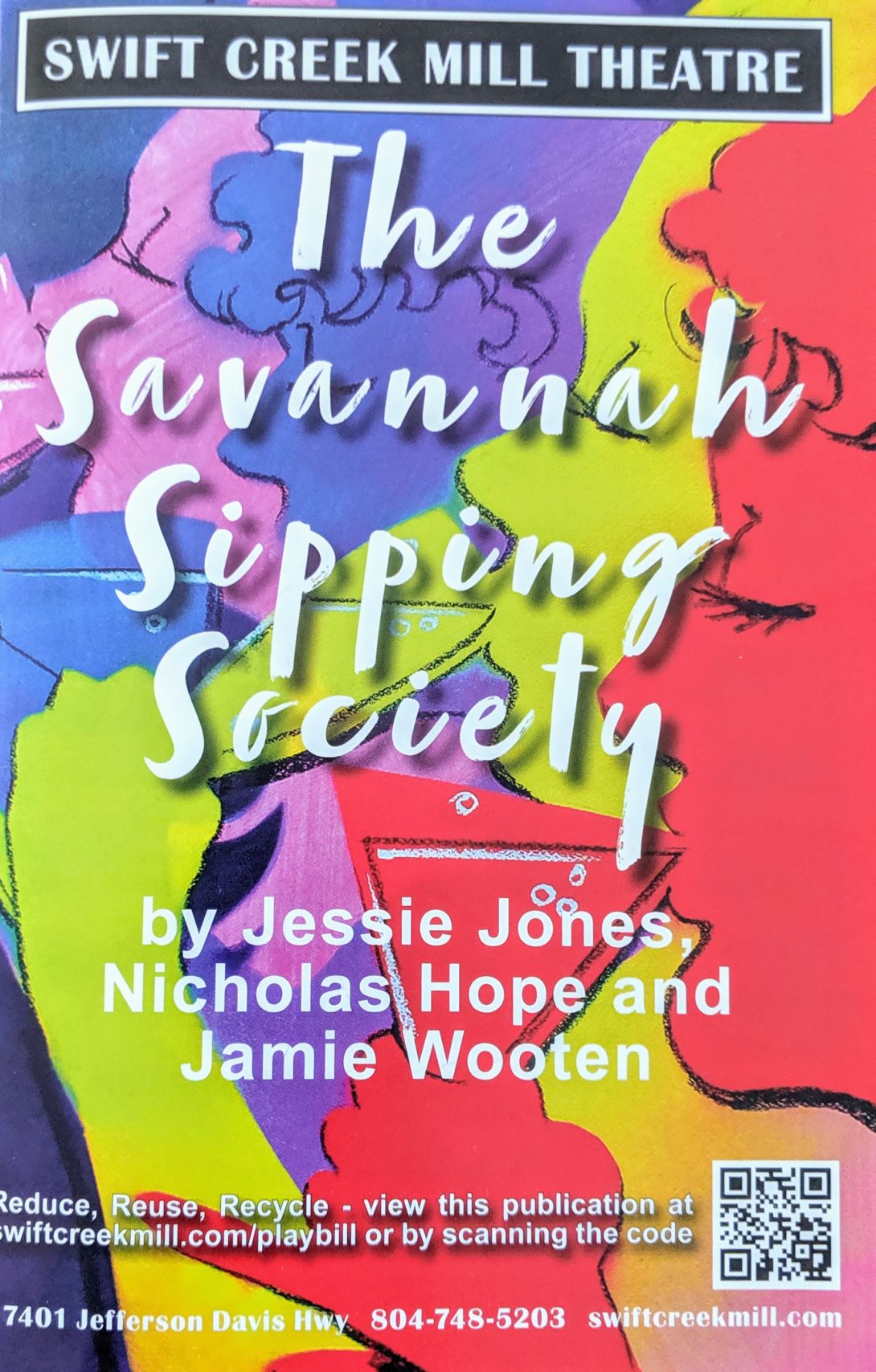 We enjoy many cultural delights in the Greater Richmond area. One of our new favorites is the fabulous, historic Swift Creek Mill Theater. We had to add this adventure to our list of 52 Small Pursuits of Happiness this year. 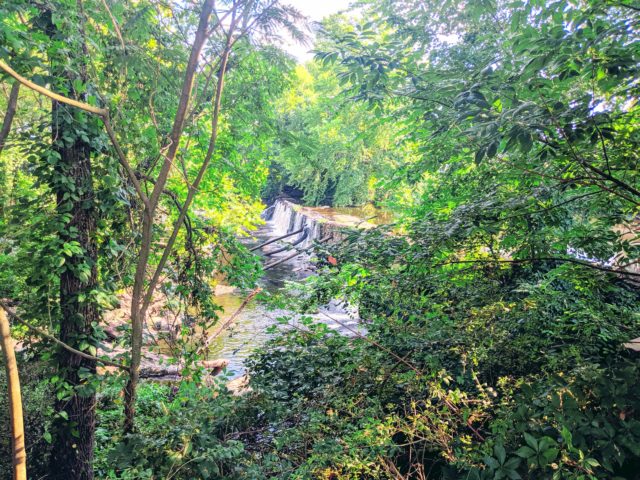 First observation: Swift Creek Mill is an absolutely beautiful setting—with, of course, an old mill stream. Camille, who joined me for this evening, noted that the venue is “as cute as it could be.” It is indeed an historic stone mill, built in the 1600s—only about 50 years after Jamestown was established, as ingrained into the landscape and the community as if it grew right out of the ground. It is a local treasure. 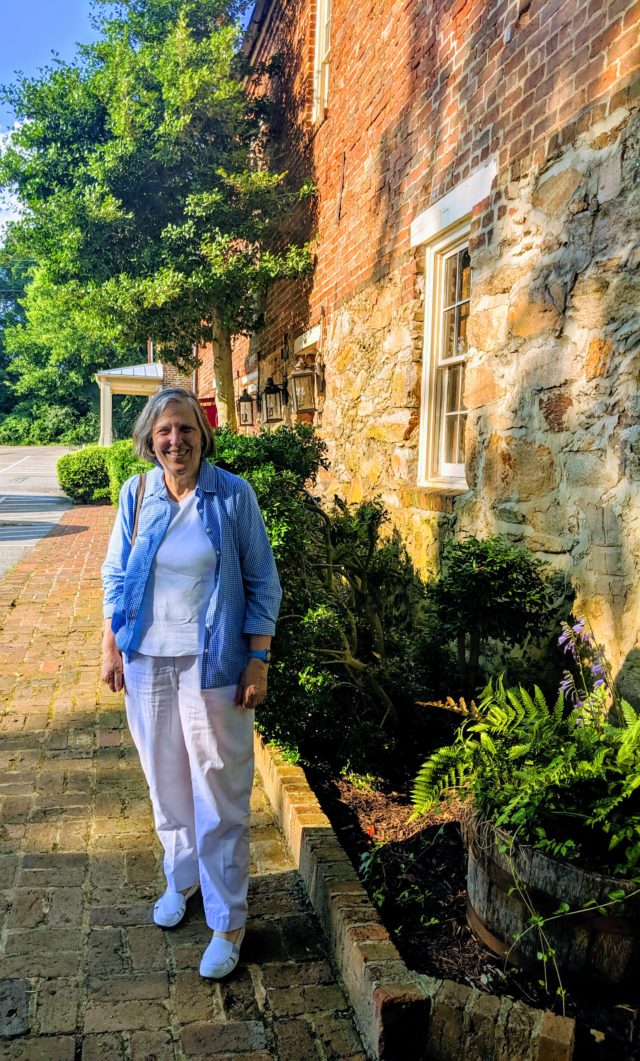 And this isn’t just theater, it’s dinner theater. Second observation was from Camille, who pointed out that I was likely the youngest person in the room! Yes, without a doubt, dinner theater is popular with the Boomer and Senior crowd. This is where our generation mixes and mingles! And how fine it is. We had the best evening. Dinner theater is really fun—who knew? Well now I know, and I am going to be a subscriber. 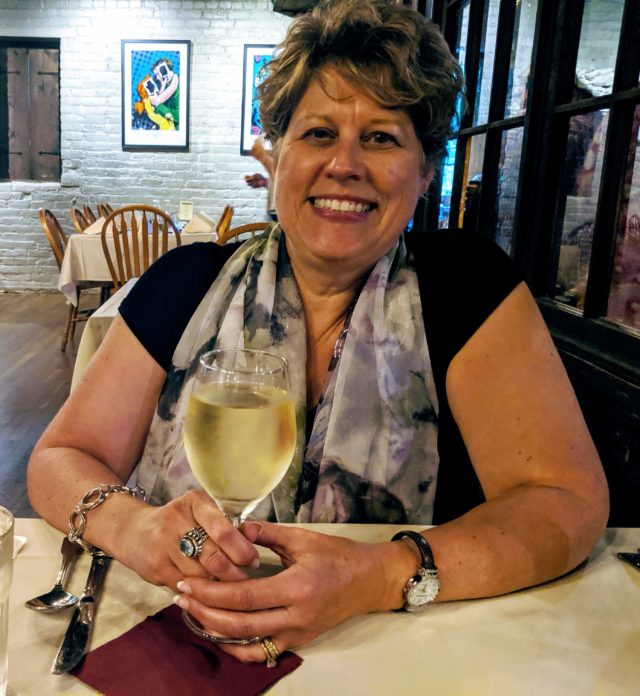 The show starts at 8, and if you choose to have dinner at the theater those tickets can be purchased separately ($17). Seating begins at 6. Of course, we wanted the whole enchilada, so we arrived at 6 ready for a glass of wine and the menu. We could not have picked a better show. On stage this evening was The Savannah Sipping Society, about, appropriately, four Boomer-age women who form an unlikely friendship, which becomes a source of support and raucous good times. 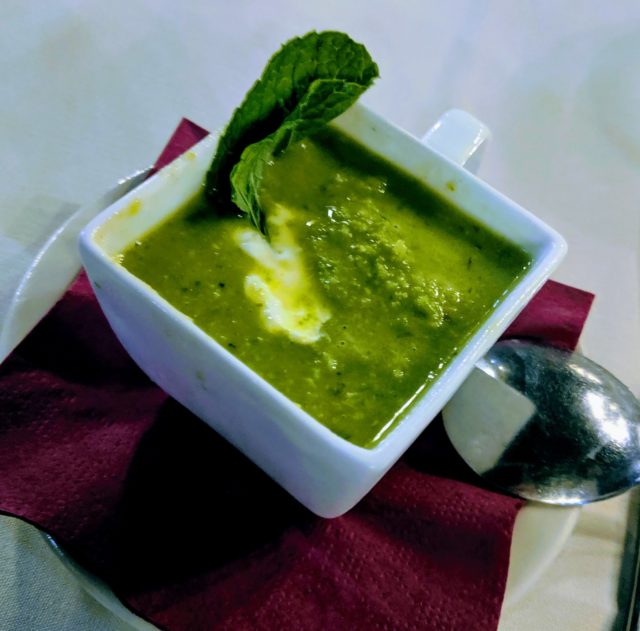 With a nod to the “Savannah” theme of the performance, the dinner menu was straight Southern. Dinner was introduced with Chilled Pea and Mint soup, a delicacy new to me, followed by chicken and sausage etouffee with rice, fried green tomatoes with crawfish crème, collard greens, ambrosia, and pickled watermelon rind.  I have heard tales about the latter but never had the pleasure of tasting until this evening. 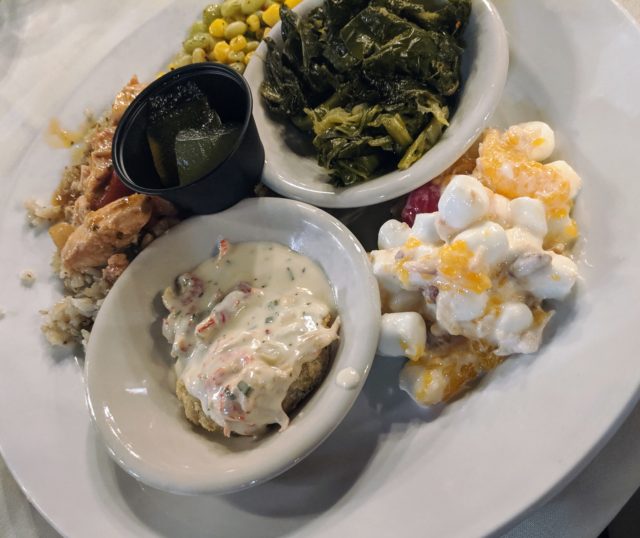 While I appreciated the cultural experience and like to eat just about anything, I will admit these rinds were not my favorite offering. Apparently, I am in the minority, however, because when the director came on stage to open the play, he noted that pickled watermelon rind, a house favorite, was now being jarred and sold in the gift shop, and a rousing cheer went up from the audience.

The Savannah Sipping Society is a comedy with some truly hilarious moments and unforgettable lines, but with a serious theme about challenges of aging being counterbalanced with the great value of having compatriots—and partners in crime— to share this journey. As one of the characters so correctly pointed out as she raised a glass of bourbon: Here’s to believing it is never too late to make new old friends. We Boomer partners and our colleagues could not agree more; we talk about it all the time among ourselves and on this blog, which made this new experience even more enjoyable and relatable.

The Savannah Sipping Society is definitely a “chick” play; I wondered how the men in the audience were taking the jokes about hot flashes and perplexing love lives. But as I looked around at the audience, all I saw were smiles and laughter. One of the characters, whose husband had recently left her for a 23-year-old and was now spending his time at the gym slimming down, described her ex’s ideal weight as: Four pounds….plus the urn! 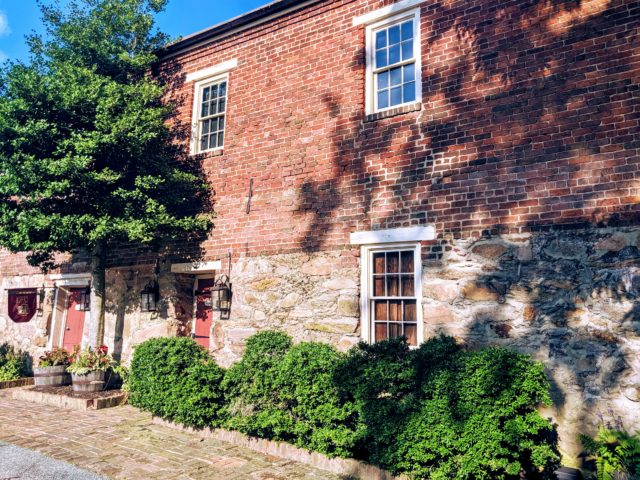 The theater space at Swift Creek Mill was created in the 1960s, when local community theater was thriving and a popular entertainment venue. Many community theaters fell by the wayside over the ensuing decades and Swift Creek Mill is one of the few of its kind left in the country. And it is thriving. In addition to the Mainstage productions like the one we attended, it houses a strong children’s theater program where young people have the opportunity to learn and grow through exposure to the arts. The theater is also a gallery, its walls featuring local artists. In 2013 the facility was renovated and became ADA compliant, so is accessible to all.

This performance was the last of the 2018/19 season. The new season opens September 14, with five mainstage productions between this fall and spring of 2020. Standard ticket price per performance is $40, $35 with (65+) senior discount. The theater will be hosting Cabaret Nights, which sound fun: area performers offering evenings of songs and stories. The dining room is also open for brunch, and the Mill is a venue for private events.

The play was written by Jessie Jones, Nicholas Hope and Jamie Wooten—Jamie actually wrote for the TV series Golden Girls, a cast and storyline close our heart! They typically write for and about “mature Southern women.”

Our favorite line of the evening: To find the happy, exciting life you deserve you have to fight for it….Now is the time to be fearless!

Swift Creek Mill Theater has been another great local find as we continue our Small Pursuits of
Happiness. Richmonders and visitors, check it out!