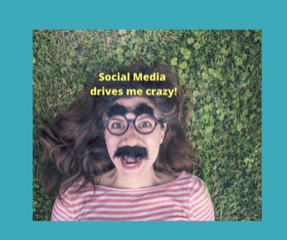 Does social media drive everyone crazy, or is it just me?

I suspect social media might be more challenging for folks at retirement age than for those younger, who grew up with this technology. It appears that our young people were born with an innate ability toward technology of any kind.

Social media is like an epidemic! It has spread rapidly, affecting large numbers of people. And, sadly, not all of the changes social media has brought are positive.

What is social media? The Internet defines it as websites and applications that enable users to create and share content or to participate in social networking.

The population is creating and sharing constantly: posts, photos, videos, advertising, etc. The huge volume can bring us to distraction and stress. Learning to use social media can be a real struggle, especially those of us in the 50+ population…and then using it can be overwhelming! One wrong click can become expensive; or it can ruin a reputation.

What do people share about? Everything! I tend to enjoy input about kids, pets, travel, happy moments, positive quotes, and helpful information. It was through Facebook I learned about the death of a dear church member and the details of a family member’s wedding. I was also able to track a relative’s illness. If we hope to stay in the loop, use of social media is imperative.

No doubt, technology is amazing! With our smartphones, we can contact thousands of friends–but only a small fraction of them are people we’ve met! Because of social media, we’re calling acquaintances our friends.

Here’s the thing though: While we’re busy working social media, even if simply taking pictures and sending them, we’re giving up enjoyment of the present moment – we’re not experiencing quality ‘one-on-one’ communication.

Sometimes I like to take myself out to dinner. While there, I enjoy watching other people as they interact at their tables. What have I observed? People sitting at the same table without talking while working their smartphones (including couples). The most time they spent actually communicating was a short discussion about the menu, and what they might order. I’ve also observed teenagers interacting during selfie shots, only to return to the phone to share those pictures.

I’ve found a few facts about social media from Wikipedia, and I thought you may find it interesting:

Facebook is by far the largest player. It began in 2004, as a platform for the Harvard students’ Community. Now, it’s one of the most influential networks in the world.

Linked in is actually the oldest of all, founded in 2002 and launched in 2003. It remains mainly a platform for professional networking.

Although our way of life may have changed drastically with the advent of social media, there are great advantages for people who may not have mobility. They can go to social media for their communication with others. When emergencies come, it is a valuable resource for getting help, bringing a sense of security. Research findings suggest that continual use of social media ignites our brain activity, resulting in improved memory (that’s great news for me, since I don’t enjoy crossword puzzles).

Social media requires our ability to adapt to change. Although there may be disadvantages and drawbacks, it’s here to stay. We can decide to accept it, learn more about it, and enjoy all the advantages it brings to us.