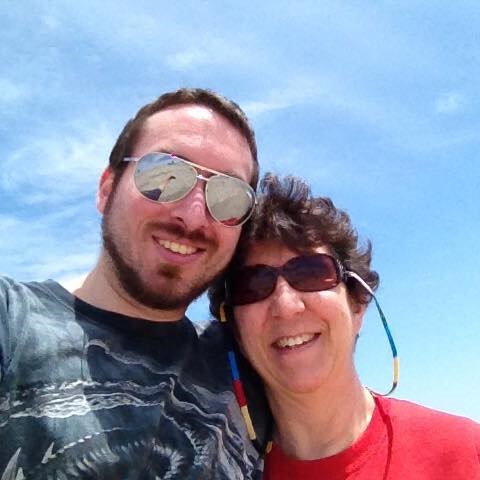 Traveling with My Son, Then and Now

Since my divorce in 2004, I have had many opportunities to travel with my son.  These “mother and son” adventures have changed over the years as you would expect.  Our family vacations were a bit challenging.  When he was a child, he and my daughter used to argue in the back seat, “are we there yet”, etc. I am sure you can relate!  He was a fidgety little guy, but he enjoyed seeing different places.  For the most part, he traveled well as a child.

In 2004, our first trip together, he was a high school senior.  We decided to go to Florida to see family and to get his mind off his parents breaking up.  Our conversations on those long drives were about his future, college, job opportunities, etc.  He and I have always been able to talk about anything and I mean anything.  Some things a mother really doesn’t want to hear!  The trip to Florida was a great success.  We visited my brother who was living there at the time and also visited my late uncle.

My brother told us that we should go see manatees.  He told us about snorkeling in Chrystal River, Florida. Supposedly we were guaranteed to see a manatee. We went to the location and were given a Jon boat with an electric motor on it to go out into the river. The guides suggested places to anchor to guarantee seeing the manatees.  So my son and I went to one of their suggested locations, anchored, and jumped into the river.  We didn’t see anything immediately, but we stuck it out in hopes that we will see one of the amazing gentle giants.  All of a sudden this enormous shadow came into view.  The shadow was a manatee that was about 17 feet or so.  It was at least as long as the boat.  We were both so excited and a little intimidated.  We both went under the water and wanted to see this beautiful, gentle creature up close and personal!  We were actually able to touch its back. What a cool experience that was!

The latest trip was, again, to visit family.  We travelled to Atlanta.  My son has never been to Atlanta.  I asked him, he was up to it, so we went!  My brother lives in Atlanta and they hadn’t seen each other in a while.  It was a nice visit.  We got to visit a couple of museums and to see a little of the downtown area.  It was a short trip, but my son is open to going back again so we can experience more of Atlanta.  He enjoyed getting away for the weekend and so did I!

On the drive back from Atlanta, my son was looking at his phone for concerts coming up that he could bring his girlfriend to.  He found one in Northern Virginia with Alice Cooper, The Edgar Winter Group, and Deep Purple.  He didn’t really know the music of Edgar Winter and Deep Purple.  He had seen Alice Cooper and really loved his music. He found some songs by the other two and was playing them on his phone.  Of course, Mom was rocking out to Deep Purple’s “Smoke on the Water” and Edgar Winter’s “Frankenstein”.  He was laughing at me.  I explained to him that those bands are from my era, the Baby Boomers!  Well to make a long story short, I invited myself to go to the concert with him and his girlfriend.  He was actually cool with that!!  I will be sure to write another blog about that concert!

Over the years we have done many trips together.  Mostly it has been to visit family.  Our conversations have changed.  Now my son is an adult with a job and a girlfriend.  I am so awed to see the amazing man that I raised.  He is a good person and the best part is that we can still talk about anything.

Marie Giammarco is a mid generation Boomer who came of age in suburban New York, 50 miles north of the city. A child whose mom and grandparents were Italian immigrants, her close knit family defined her growing up years. The product of an environment that revolved around food, health, and physical activity, she saw many elderly people age before their time because they lacked these things. She has a passion to help Boomers and Seniors to be active and live a longer, more healthy life.