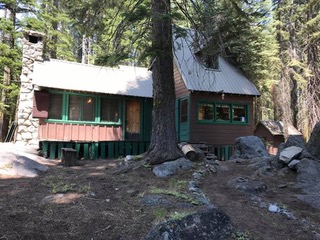 How did my siblings and I inherit a 100-year-old cabin in the Sierra Nevada Mountains in California? Our grandparents bought this place for $800 in the summer of 1943. They lived in the Central Valley and wanted to have a place to go where it was cooler, among other reasons I’m sure. The next-door neighbors, the Watkins, had several cabins and so my grandparents bought this one. Our mother and her twin sister were 13.

The Watkins had two children, Harry and Jennifer (for whom I am named), and who Mom would entertain and care for over the years. Our families became very good friends. After my brother Teddy and I were born, our mother would bring us to Huntington Lake every summer for at least a month, sometimes longer. Harry and Jennifer would take us for hikes, or fishing, or just entertain us.

We moved to Virginia in 1971. Since we were moving so far away, Mom gave her share of the cabin to her twin sister. Our cousins used the cabin from time to time, but it just didn’t elicit the special feelings for them that we had for this place. As a teenager, I saved money and came out to the cabin a couple of times and so did Teddy. 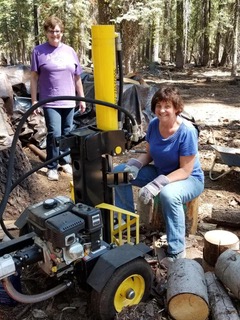 Soon after I married, my husband Tom Pool and I came to the cabin one summer together with Teddy and his wife. It was still special for us both, and now we were sharing it with our spouses. Tom and I brought our kids out to visit the cabin several times over the years and one summer we were together with Teddy and his family. What fun! The four kids loved it, such great memories!

Tom and I celebrated our 25th wedding anniversary at Huntington Lake in July 2007, by renewing our vows on a sunset cruise. I surprised him with this celebration and our children were our witnesses! Another lovely memory of our times at this very special place! Thanks, Jackie Andresky, for asking about this!

In the summer of 2009, we brought our kids out for a visit, and someone was also at the Watkins cabin. Harry and his family were at the lake! After all those years we hadn’t seen each other. The friendship took off just as it had over 35 years before and we have remained in contact since.

When my husband Tom became sick, he asked that some of his ashes be scattered at Huntington Lake and when he passed away, we honored his wishes. Mom died several years earlier, and her ashes are also there.

When my uncle decided it was time to let go of the cabin, we felt we had to acquire it. 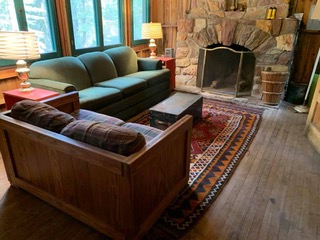 The cabin needed a lot of work. We didn’t even have a working toilet. The Watkins kindly offered us the use their small cabin while we worked to get ours fixed up. Teddy and I worked for six weeks together on our family cabin, hoping to keep this legacy going for another 100 years.

We are still working to restore the cabin. Living so far away makes it difficult to get much done, so we must plan our stays months in advance. This year Teddy and I both came for a stay, but our calendars didn’t allow much of an overlap–only a couple of days. However, the community of cabin owners is remarkable. The same families we grew up with still own their respective cabins, and we have been reunited with others who share the legacy. Lloyd and Linda Farris are a great example: we knew each other as kids and when they found out what we were up to, they told me to plan my stay to coincide with theirs, so they would be here to help me. Now that’s a great community and wonderful friends! It’s so special to rekindle those friendships, and to meet so many other people who were “Raised at Huntington Lake.”