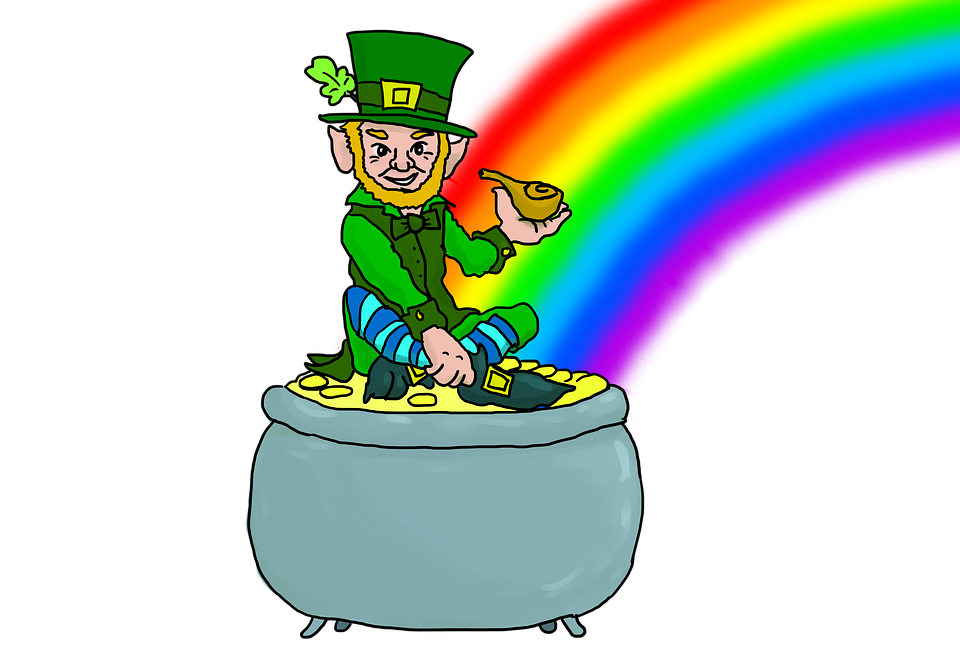 Grandfather was a tiny, ornery old man, who loved to pull tricks on others. A shoemaker by trade, he had a modest little shop in a small Irish settlement named Cahir. He often spent time during the wee hours of the night carousing, drinking, and sharing tales at the local pubs. It wouldn‘t take much to get him angry if a person told a slanderous Irish joke within his earshot.

The great secret is this: Grandfather was a leprechaun.

One day long ago, after a particularly terrible storm, as the sun began to shine through the clouds, a beautiful rainbow appeared. Grandfather had prepared his whole life for this special rainbow. He wasted no time in closing his shop to follow it to the pot of gold.

After traveling many miles, and exhausted, he arrived at the end of the rainbow. Along his journey, grandfather discovered several other leprechauns on this same quest. Well, he would have none of that!

Grandfather knew himself to be a good fighter, especially after having many scraps with other fellows at pubs. He usually came out the winner by brute force mixed with stubbornness or trickery. Grandfather went to battle with these less experienced leprechauns. After much ferocious ruckus, he was able to run them all off.

Knowing some of them may return, grandfather quickly took his pot of gold away in a wheel barrow. He pushed and pulled his barrow until he had no strength left. With his pick and shovel, he searched for a great spot to bury it.

But where to bury the treasure?

Grandfather considered an ideal place under a particularly beautiful old Sessile Oak tree. This tree was located almost a day’s journey from where he first discovered the pot of gold. Surely no other leprechauns would be able to find his treasure.

To ensure he could find his treasure easily later, he made an ornate design resembling his family crest on top of freshly dug dirt. Considering himself clever, he used only acorns for his design. Grandfather then left;  he had plenty of time to figure out the safest way to secretly retrieve it.

Finally, he reached his destination. With only a sliver of moon light available, grandfather stopped at the spot where he had buried his treasure.

Although none of the trees seemed to rise above the acorn design, he was sure he’d reached the right spot. It was a particularly beautiful tree. He realized squirrels or other critters probably took the acorns, destroying his design. Quickly, he dug into the hard ground several feet deep. But, no pot of gold!

Grandfather became frantic, and dug under another Oak tree. But after digging several feet, again he found no pot of gold. He became angry; his face turned a bright red. He fussed loudly while he thrust his shovel into the ground beneath one Oak tree after another. No pot of gold! After many days of unsuccessful digging, grandfather went home, a defeated old man.

For several years, grandfather often returned to where he believed he had buried his treasure. He searching and dug, but never found his pot of gold.

Grandfather was indeed rich though, with the abundance of great adventurous stories he told.

One thing I still wonder about…

If he didn’t ever find his treasure, then why do I mysteriously find gold coins each year on St. Patrick’s Day? One year a gold coin was found in a dresser drawer, another time in a chair, and last year even in a flower pot! Surely Grandfather is behind this?