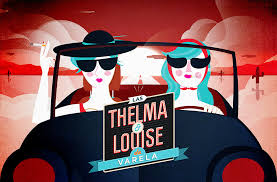 CategoriesDiary of an Empty Nester · This Boomer's Life

Do You Want to Be Thelma or Louise?

When my only child left for college, I was sad. I was dreading this new phase in my life because, despite my work and family and the many things that make up a life, raising my daughter had defined that life for the past 18 years. The beginning of the day was marked with getting her out the door; the end of the day always was marked with welcoming her home, trucking off to various activities, having dinner, earnestly discussing the latest drama that always seemed to be swirling around her. When she left, the days became quite different. So quiet. Sure I have my own life, but still—it was hard. My little girl is a mini-Me. I miss her terribly. It strikes me that this is one of those “Passages” with a Capital P. As Boomers we have dealt with many such transitions that are difficult, yet often have a silver lining.

That silver lining is getting brighter and brighter as I rediscover a sense of freedom I had all but forgotten. I was joyfully reminded of it when my dear friend Loralee came to visit recently—the first visit in almost 2 decades where we were totally unencumbered, like when we first met as college students…

That was a glorious time; we were Junior year Penn Staters, taking a semester abroad to study Art in Rome, Italy. I know, cool right? We just happened to be seated together on the Alitalia flight. We were both nervous, terrified even. This was before cell phones. There was no calling home. It is impossible for me to imagine sending a child off to Rome and not even knowing if they landed safely. How did our parents cope? Both of us were from very small towns in Pennsylvania, neither really knew any of the other students in our group who all seemed very smug and artsy. It was an overnight flight that left from Newark and while most of the other kids around us finally fell asleep, we became best friends in that darkened airplane, pored over the Vogue magazine she had brought, discovered a similar fashion sense, loved and disdained the same things, told each other our life’s stories, and talked about our boyfriends, who later became our husbands. Both of us have now been married to those boys for 30 years. Loralee and I are still best friends.

When the tour guide dropped us at our pensione, of course we grabbed a room together. It was the first week of January 1985. It is COLD in University Park PA that time of year so we dreamily envisioned the sunny Mediterranean climate we were heading off to, and packed accordingly. Oh how tragically wrong we were! It was the coldest winter Rome had experienced in decades. We were shivering and miserable and had to use our meager funds to buy cheap coats from the street vendor. We shared our few sweaters and scarves, layering them all on top of each other. Our landlord was miserly with the heat. In Italy, the hot water runs out really quickly and we never again took our modern American plumbing and fluffy towels for granted…not for the rest of our lives. We crept into a café for tea and didn’t know how to ask for the check. We were told that most Italians could speak some English but that turned out to be a big exaggeration. What I clearly remember was the site of Italian ladies in mink coats. Many, many ladies have them in Italy apparently but rarely get the chance to show them off, so the city was awash in a sea of beautiful Italian women in minks. I was totally intrigued and infatuated by this city, which revealed one incredible secret after another, each and every day. Every church, no matter how modest, held some artistic masterpiece. For us art students, it was sensory overload at its best. The cold winter turned into a glorious Roman spring. We saw the Pope at Easter deliver his sermon at St. Peters Square, then went home to eat croissants and drink Prosecco. We traveled to Florence, Naples, Assisi, Pompeii…too many memories to even recall.

It quickly became apparent that what goes to Rome stays in Rome and the students went about living a life and having…adventures…they never would have had back home. We were no angels either, a bit badass, me more than her. Enough said.

Because as time passed and life unfolded, those charmed youthful days became a distant memory. Loralee and I both got married soon after college, both our husbands were military but in very different jobs, so we were far away and our paths rarely crossed. We became grownups, took on responsibilities, both lived overseas as military wives, good times and bad, births and deaths, change change change. Lost touch. When I saw the movie Thelma and Louise many years later I remembered my friend who I thought was lost to me, and I cried.

It was after my daughter was born that we finally found each other again, through the magical Penn State Alumni Directory. We had both landed back in Pennsylvania, and happily picked up where we left off. Isn’t finding someone again after so many years the greatest thing? Nowadays Facebook often makes that happen, and it is one of social media’s greatest gifts.

I moved to Virginia soon after our reconnection, and over these past 16 years, we have traveled back and forth to visit each other maybe twice a year, her visiting me more frequently as I had a child in school. Those visits were sacred, both husbands kindly realized that and helped facilitate. We cleared our calendars, planned all sorts of excursions—ladies lunches, shopping, lots of wine, but more importantly lots of talking: Sharing all the burdens, as well as endless philosophizing and deep discussions. As a young mom I counted on this friend time with all my heart, it was like a lifeline. Adult conversation with a kindred spirit!

So Loralee recently came for a visit, the first since my new role as a maudlin empty nester. Wow….it hit me. We are totally free! No more rushing home after our precious outings to make the grade school bus, or leaving my friend to run off to any number of evening activities my daughter was involved with, or other parental responsibilities. This time, our time was totally our own. Truly I could hardly take it in, how good that freedom felt. I started to recollect what Rome felt like. As I said, the silver lining suddenly appeared very bright indeed. This time—here is where it really gets good—we took our adventures on the road in a very very beautiful car: A 2016 Mustang, the racing model. Thank you, dear husband, for having a midlife crisis that took on the form of this gorgeous machine…and for leaving it in the garage for us.

Loralee and I jumped in the Mustang and we headed out, not over a cliff into the wild blue exactly, or to a one-night stand with Brad Pitt (tempting but no), but rather off to tour the Charlottesville wineries followed by lunch at a charming bistro and cruising yarn shops. And I turned to my friend and asked, “Do you want to be Thelma or Louise?”

One thought on “Do You Want to Be Thelma or Louise?”